Julianne Hough was spotted wearing several head-turning outfits on Monday, but this one beat them all hands down.

The 26-year-old Dancing With The Stars judge cranked up the heat several notches in a revealing ensemble while performing a number with brother Derek Hough on The Ellen DeGeneres Show.

Julianne was outfitted in a tight, low-cut top featuring shimmery layers of fringe and intricate blue beadwork that was matched with black Lycra shorts and thigh-high black lace stockings. 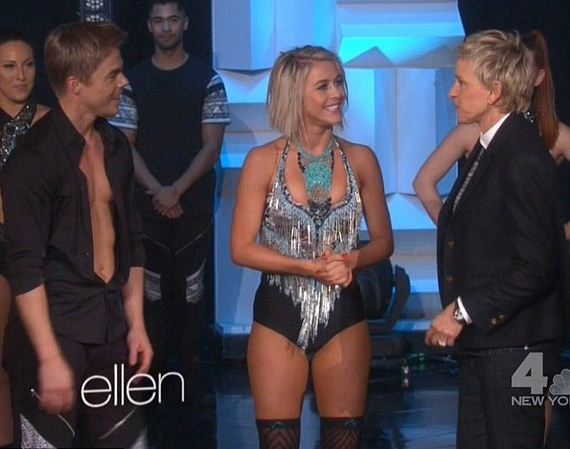 Wow: Julianne Hough turned up the heat in a tight fringe top and Lycra shorts for her energetic performance on The Ellen DeGeneres Show with brother Derek on Monday

Dangling down her décolletage was an elaborate Aztec-style necklace that gave her ensemble an even wilder spin.

Julianne, who appeared on the show with Derek to promote their upcoming Move tour, proved why she’s in such demand with that riveting dance performance.

The blonde dancer-actress strut her stuff with vigorous energy, stepping lively in a pair of high-heeled black boots. 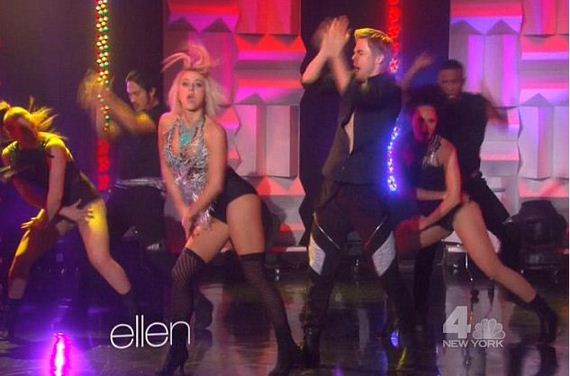 Revved up: The Dancing With The Stars pro dancer-turned-judge showed off her fancy footwork in thigh-high black stockings and boots 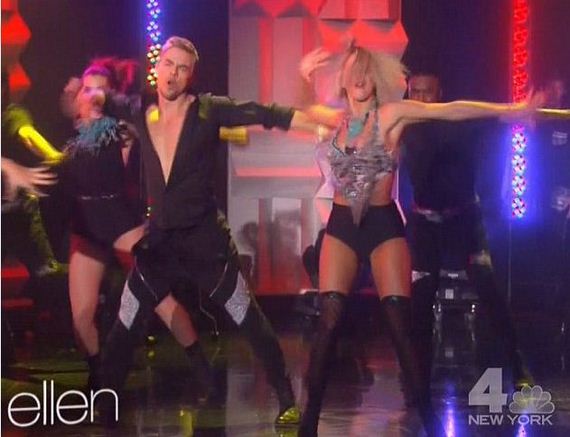 Something wild: Julianne shook her mane of blonde hair while strutting her stuff on the Ellen stage 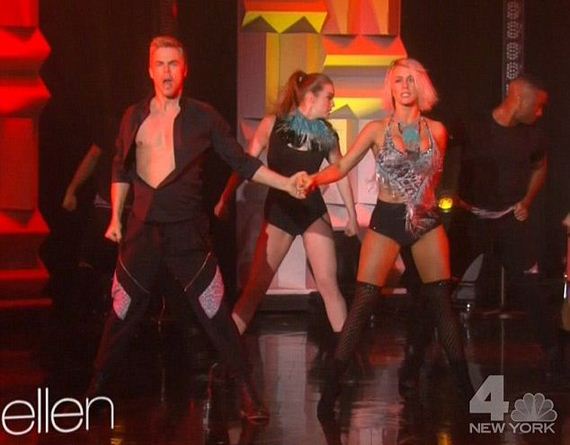 Don’t flip out: The 26-year-old was blinded for a moment by her golden tresses during another energetic move

She was smiling and shaking her light-gold tresses to and fro during the routine, and her brother Derek matched her enthusiasm with every beat.

Ellen was equally impressed, and complimented them both after the performance.

During a fun card game with fellow guest Nicole Richie, Julianne wore an olive-green and black-trimmed top with a striped skirt to match.

For her appearance on Good Morning America on Monday, Julianne was decked out in a tiny, olive-green dress featuring elaborate gathered details.

Julianne quickly switched into a flesh-toned slip of a dress for her brother-sister interview at SiriusXM Studios.

The pretty star downgraded her style into a comfortable black plaid vest-shirt and matching skirt with side pockets for the AOL BUILD Speaker Series.

Previous Polar face! Lady Gaga and Vince Vaughn dip into freezing cold Lake Michigan water for Chicago charity event after city’s coldest February since 1875
Next CHERYL’S POSH HAIRDO… has she copied it from her old rival – like all her other styles?