Actor Vince Vaughn and pop star Lady Gaga mustered up the courage to dive into freezing cold water for the Special Olympics charity the day after cities across the country broke cold records for last month.

The Chicago-native Wedding Crashers star was the celebrity guest of honor at his hometown’s annual Polar Plunge, in which brave swimmers raise money for athletes with special needs by plunging into Lake Michigan.

Vaughn, wearing a Blackhawks hockey jersey and jeans, led the way into a patch of frigid, slushy 33 degree water near Lincoln Park that had been cleared of snow, which has accumulated in the city and much of the US. 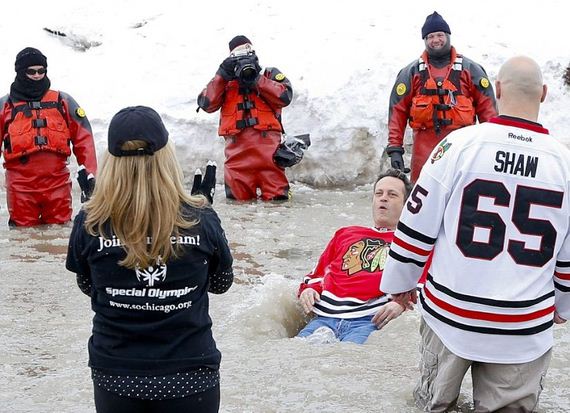 Icy dip: Actor Vince Vaughn was the Special Olympic Polar Plunge celebrity guest on Sunday, when the water was right around the freezing point 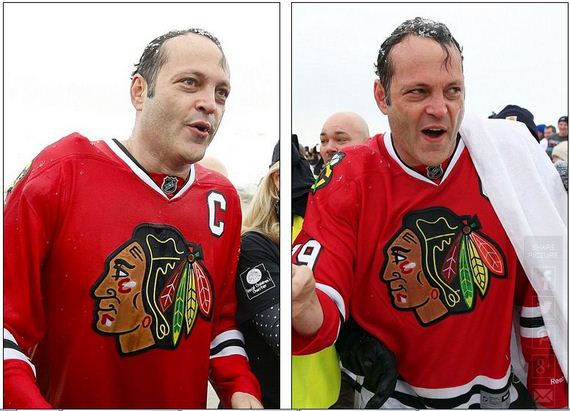 Hometown hero: Vaughn, a Chicago native, wore a jersey from the city’s Blackhawks hockey team and jeans to take the icy dip and warmed up with a towel after the trying ordeal 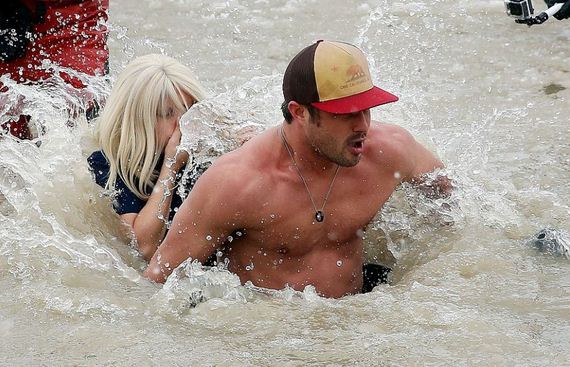 Taking the plunge: Lady Gaga joined her new fiance, Chicago Fire actor Taylor Kinney, at the event with his co-stars on the show 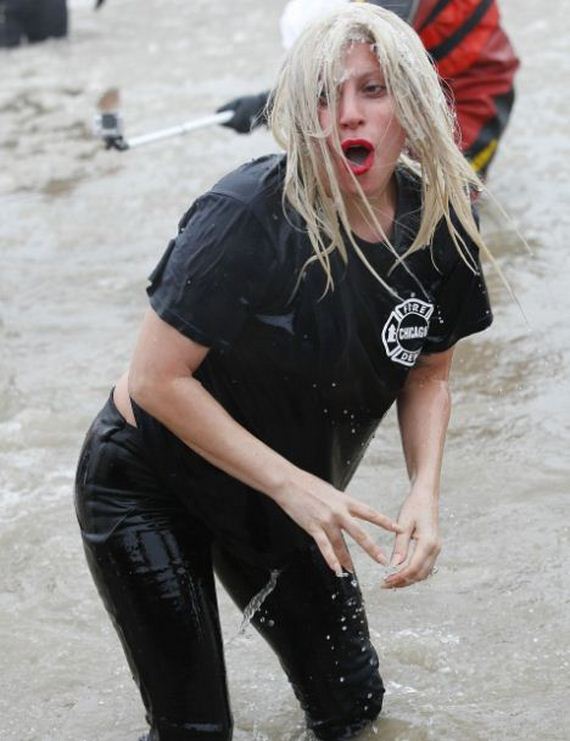 Poker face: Celebrities such as Vince Vaughn and Lady Gaga found it difficult not to grimace in the freezing patch of Lake Michigan

The star of upcoming movie Unfinished Business first went in up to his knees before lowering himself into the water backwards.

Gaga attended the event with shirtless fiance Taylor Kinney, who was wearing a baseball cap and shorts, and his costars from the show Chicago Fire.

The singer rode piggyback-style with Kinney into the water before they fully immersed themselves into the lake.

The couple then played with each other in the frozen surf and retreated to the warmth of the shore.

‘Taylor gave me his hat I thought my wig was gonna freeze into and become one with the lake,’ said the songstress, who will take different sort of plunge with her beau after becoming engaged last month..

Lake Michigan was estimated to be right at freezing when the event began at 10.30am Central
Time. 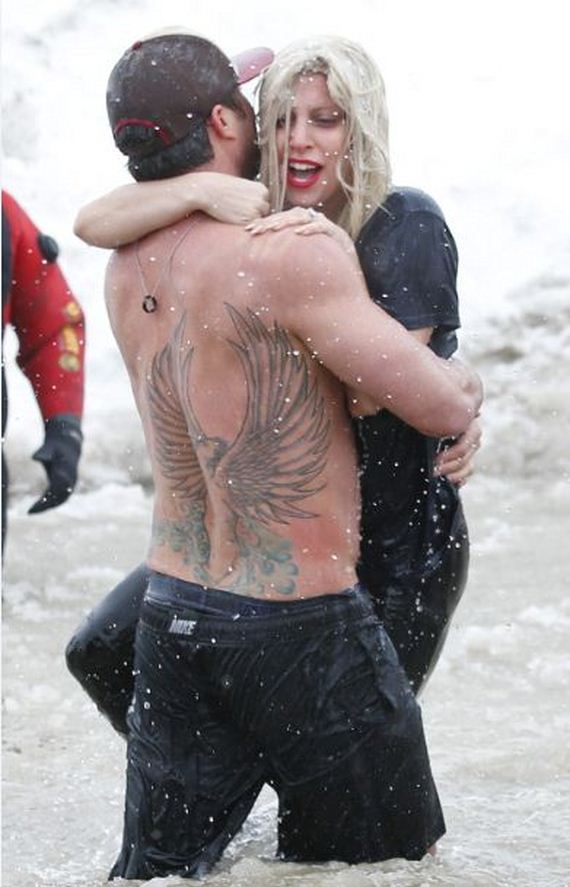 Staying warm with love: Lady Gaga attended the charity event with her fiance after getting engaged to the television actor last month 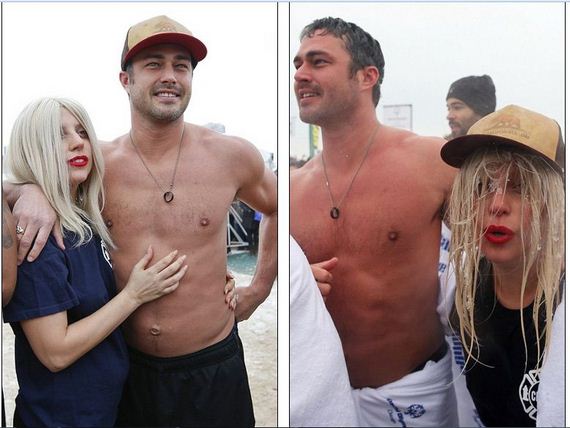 Before and after: Gaga and Kinney looked comfortable while posing for photos (left) before their plunge left them in varied states of bedraggled 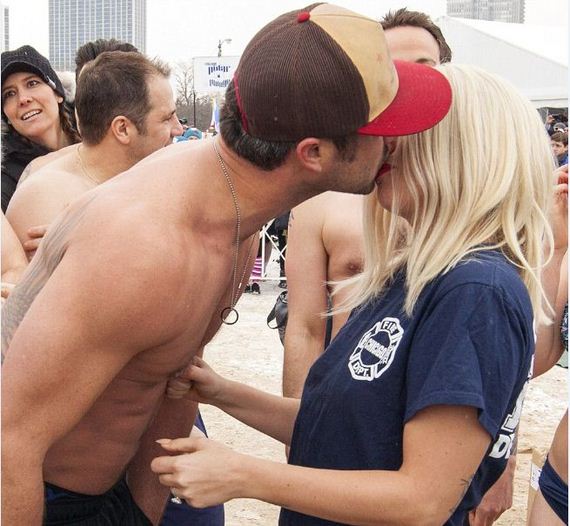 California love: A shirtless Kinney wore a baseball cap reminiscent of the warm-weather West Coast when he carried his future wife into the waters of Lake Michigan 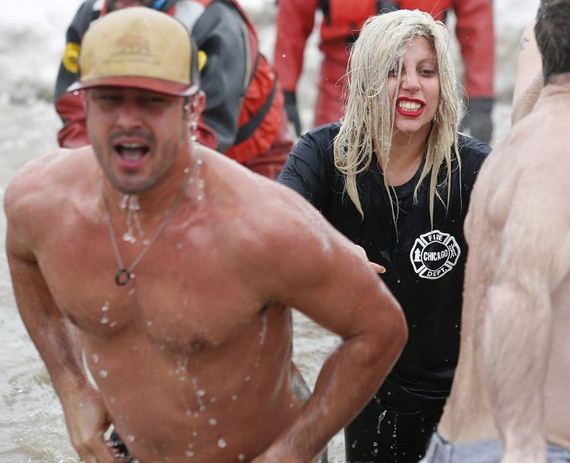 Splashing in the snow: Gaga grits her teeth as she finds the energy to play in the lake despite a winter of record-breaking cold weather 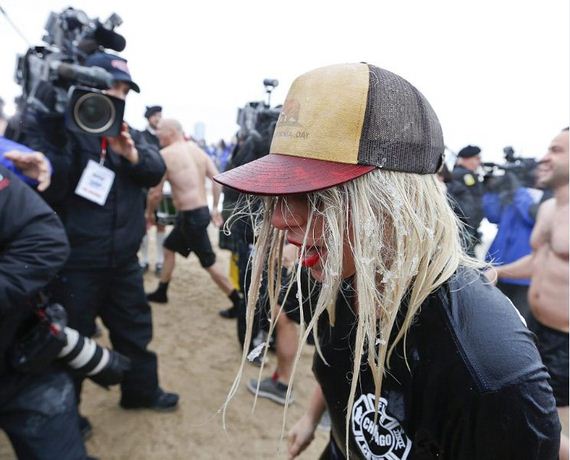 Paparazzi: Gaga, whose real name is Stefani Germanotta, lost the glamour she often displays on stage and the red carpet when emerging from Lake Michigan 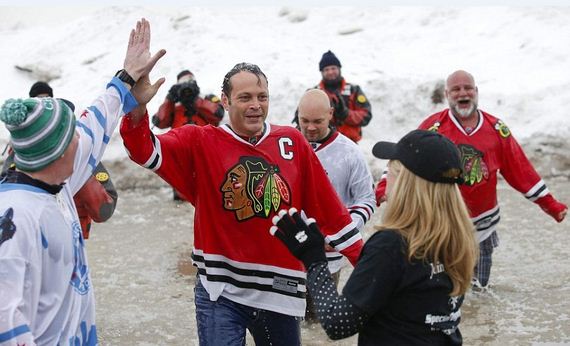 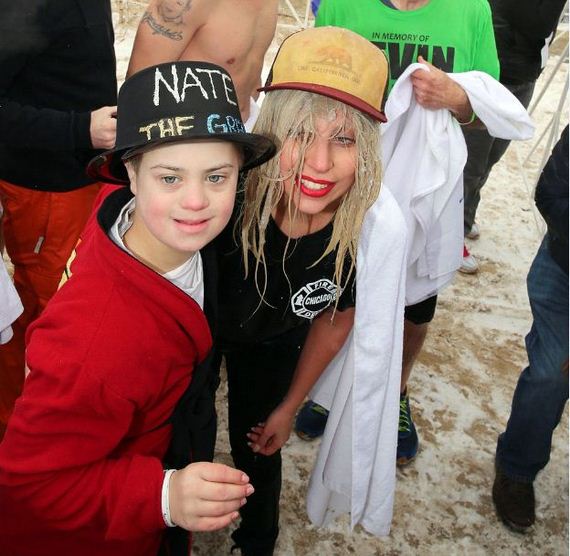 The Fame: The event draws thousands of participants and spectators to the water each year along with celebrities such as Gaga. Above, the singer poses with a fan on the beach 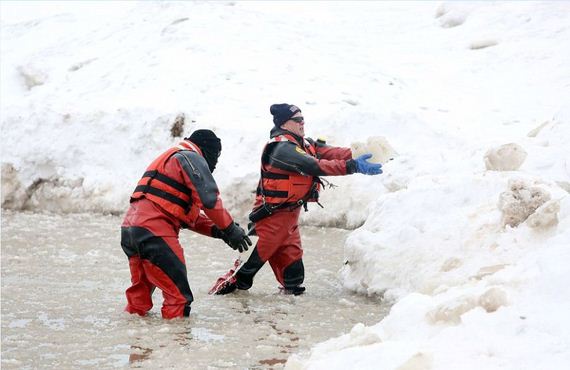