CHERYL’S POSH HAIRDO… has she copied it from her old rival – like all her other styles?

Unveiled with great and solemn self-importance, after a teaser shot of a pair of scissors and a comb on Instagram, here is the essential haircut for 2015. 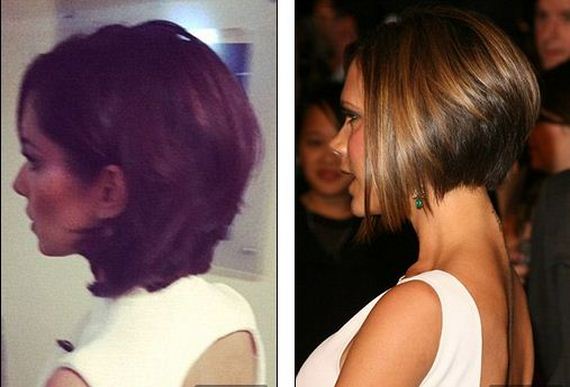 Snap! Cheryl may have tucked her hair behind her ear, but doesn’t her new bob look very familiar? Victoria Beckham wore it first, back in 2007 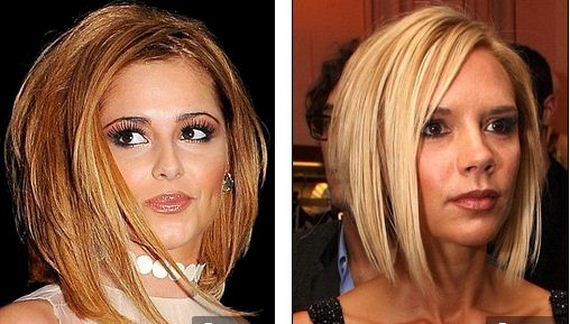 My fair ladies: Cheryl (left) and her lighter locks, in July 2011, mirror a golden Victoria in her Spice Girl reunion days in December 2007 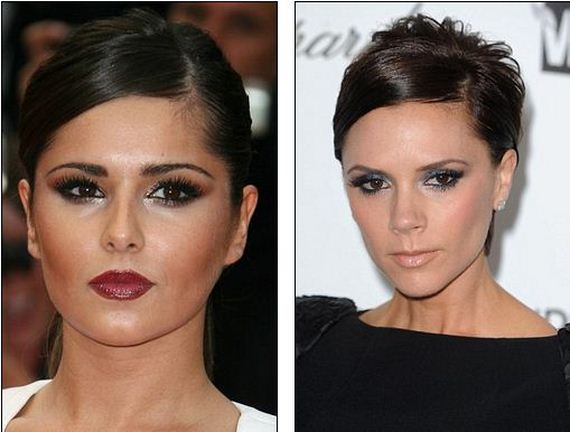 Side issue: A slick parting heralds a serious look for Cheryl in May 2011 (left), but a pouting Victoria had already got there in February 2009 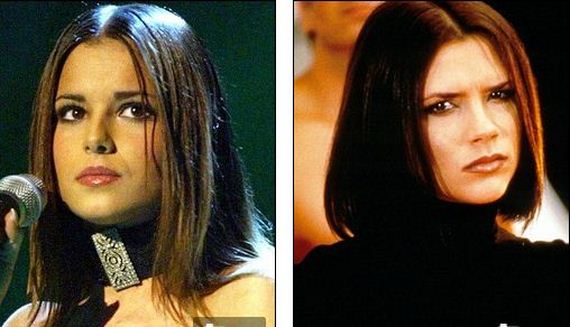 Centre stage: Both girls went for the centre parting, dark bob early in their careers – Cheryl (left) in 2002, following Posh in 1997 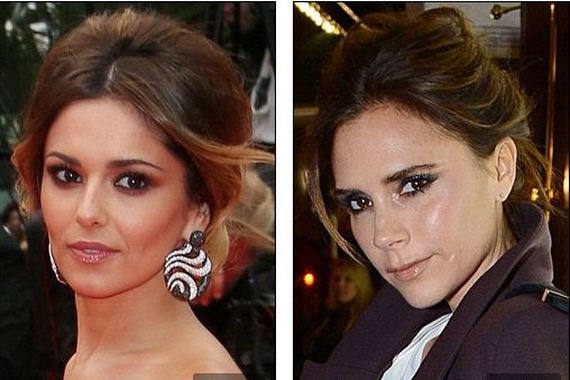 Pin-ups: Cheryl (left) unveils her messy up-do at a film premiere last year, while Victoria tried her version in September 2013 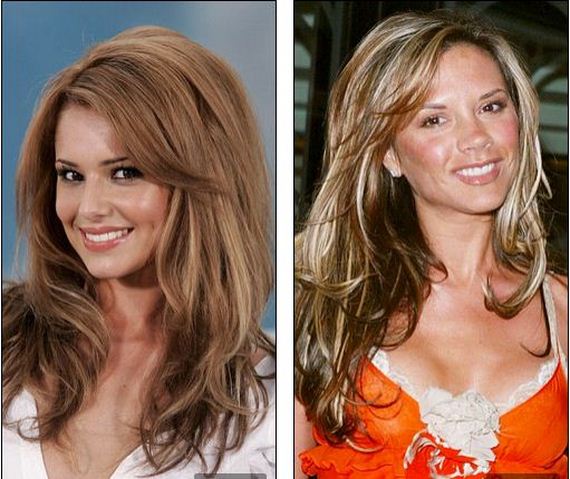 For, it turns out, that where the former Spice Girl leads in the hairstyle stakes, so former Girls Aloud singer Cheryl follows. Whether it is a bob, a side-plait or a bun, it seems that Cheryl likes to borrow, or revisit, looks from her style mentor.

Of course Victoria, now 40, did it all first — from a career in a world-beating all-girl band to marriage to an England footballer.

The two women were even friends once, particularly during the 2006 World Cup football finals in Germany, when Cheryl travelled to watch her then fiance Ashley Cole and Posh was there, too, with Becks.

However, relations between the two women became frosty after Ashley was accused of cheating in 2008, just two years after their wedding, and Victoria didn’t even call. Cheryl said she’d expected rather more from her fellow WAG.

In an interview in 2009, Cheryl said that Victoria’s clothes were for ‘older women’, and Victoria retaliated by saying that Cheryl’s range of shoes for fashion website Stylist Pick were ‘just a PR stunt’. 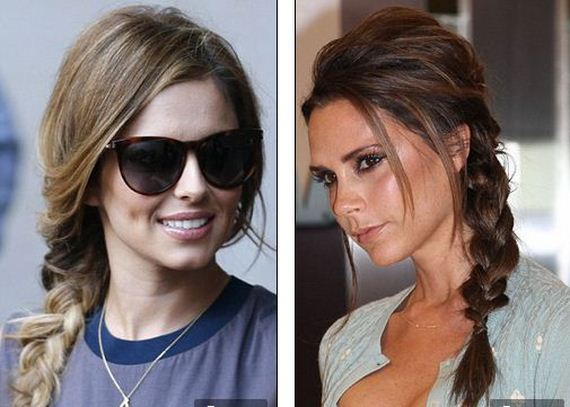 Twisted sisters: Cheryl steps out with a loose side-plait last summer – a style tried successfully by Victoria (right) in April 2012 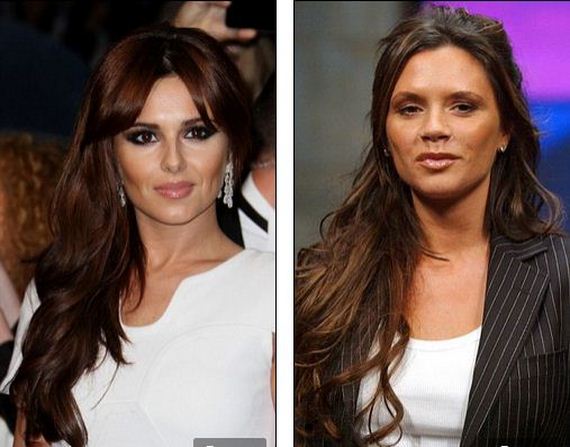 Who’s that curl? A cascading mane for both ladies – Cheryl (left) in 2012 and Victoria sporting the look a full decade earlier 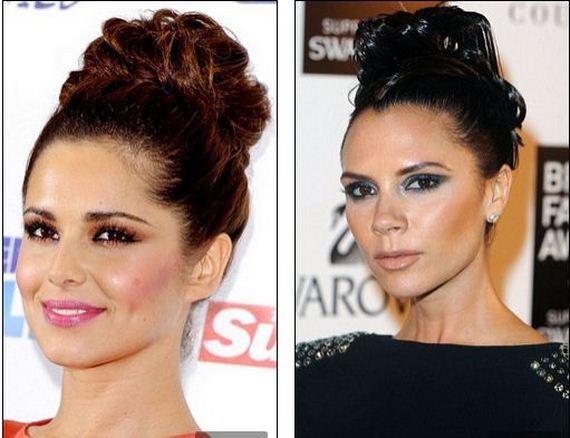 Fun with a bun: Cheryl at the 2012 Capital FM Summertime ball and Victoria (right) at the British Fashion Awards in 2009 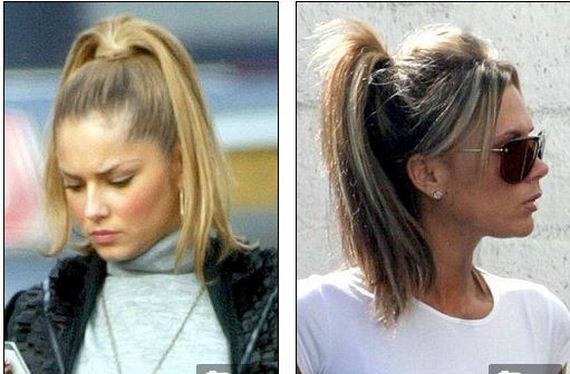 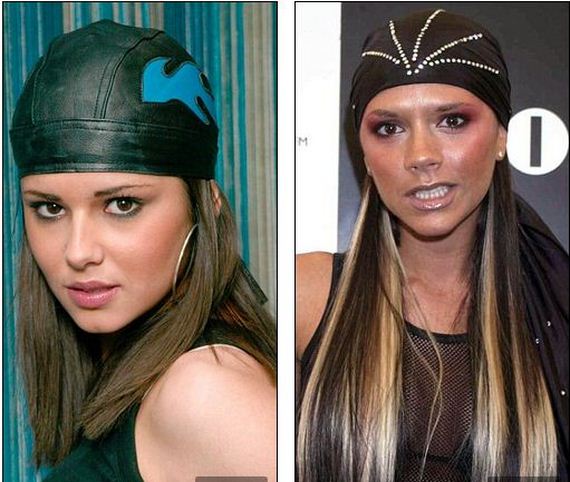 Cap that! Cheryl dons a leather cap in 2002 (left) – a year after Victoria launched her solo career with the same look

Sources in both camps indicate that they have long since made up — certainly Cheryl wore a Victoria Beckham dress in May 2012 to the premiere of the film What To Expect When You’re Expecting, and it was reported that the former Spice Girl had invited Cheryl over for dinner later that year so they could properly let bygones be bygones.

So what does Cheryl’s new hair mean? It seems to be a part of a complete make-under, embarked upon following her whirlwind second marriage to French restaurateur Jean-Bernard Fernandez-Versini in July last year, which has taken her from tanned, blonde WAG to sophisticated fashionista — a path trodden by Posh herself.

Cheryl has hired a new make-up artist and new stylist in order to embrace a more subtle, more high-fashion look.

Her new image was played to great effect during her much-heralded return as a judge on The X Factor last year, and sources close to the show indicate she will be asked to come back again this year — with a £1.5 million fee dangled as an incentive.

But will she do so, though, with a baby on board? Some fans firmly believe Cheryl is now pregnant, hence the less high-maintenance hair cut, and her relative lack of postings on Twitter and Instagram in recent weeks.

If that’s true, she can look forward to a whole new range of copycat cuts — after all, there are four Victoria Beckham pregnancies to turn to . . .

Previous Ooh la la! Julianne Hough wows in sexy fringe top and hot pants for revved up performance on Ellen with brother Derek
Next Rita Ora puts on a VERY busty display as she squeezes into a perilously plunging PVC dress for dinner date with Ricky Hil