Making headlines again, Chris Brown is extremely close to serving possible jail time since pleading guilty four years ago to allegedly assaulting his ex-girlfriend Rihanna. According to reports, a judge has revoked Brown’s probation for allegedly failing to share his drivers’ license and insurance information with another motorist after a minor traffic crash in May.

The 24-year-old is currently free pending a trial where he is ordered to return to court on August 16th for a hearing to set a trial date to determine if the probation revocation will stand. If it does, Los Angeles County Superior Court Judge James Branlin could order Brown to jail to serve part of the original five-year jail sentence in relation to the attack on Rihanna. Another judge continued the traffic case against Brown during a hearing on Monday July 15th. The singer is charged with hit-and-run driving and driving without a license. 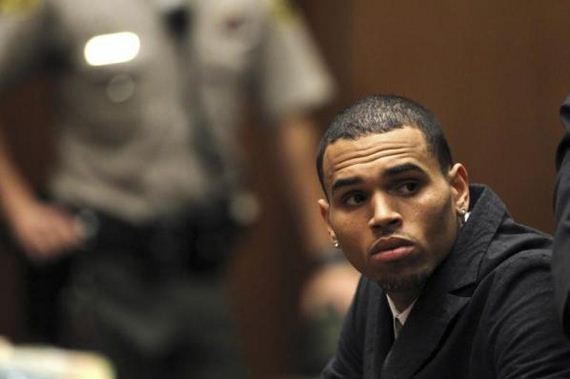 Will Conflicting Reports Prove Him Innocent?

Despite the revoke, a representative for Chris Brown said the singer expects the traffic charges to be dropped and the probation to be reinstated. A lawyer for the other motorist said in a court hearing on Monday that “his client did not want to press charges” and “that any damage was ‘negligible'”.

The lawyer also stated that “Brown did identify himself at the scene and that she was given all of the appropriate insurance information”. The singer’s rep said “we are hopefully that the case will be dismissed next week” but that doesn’t exactly seem to be the case due to conflicting reports. Olga Gure, the woman whose Mercedes was allegedly rear-ended by a Range Rover that Brown was driving on a Los Angeles street, told investigators that he “went ballistic” after the traffic accident occurred and that he screamed at her. According to the police report on the incident, Gure quoted Brown as shouting at her: “You’re a b—h!” 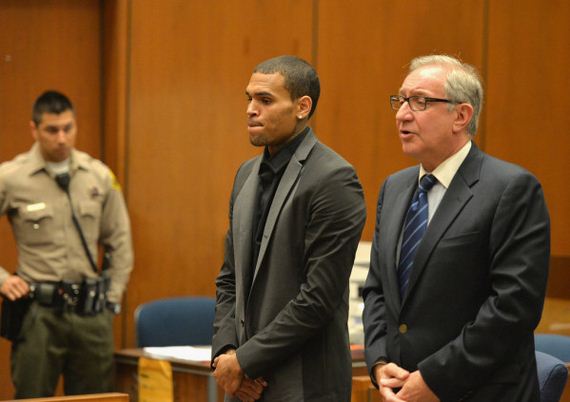 Though Chris Brown’s representative is confident that the case will be dismissed before August 16th, the police report from the incident may make things difficult. The report added more from the other motorist, Olga Gure, who quoted Brown as saying, “Who do you think you are, b—h? Do you think if you driving Mercedes so got money, b—h? Do you think I am just a black n—-r? I got more money than you, b—h!”

As reports indicate, the trigger for Brown’s alleged rage was that Gure took a photo of him and his current girlfriend, Karrueche Tran, to document the scene since he allegedly refused to show his driver’s license. Gure said that when Brown tried to grab the camera, Tran screamed, “Dont touch her, don’t touch her”. “I was so shocked, that I was speechless,” said Gure. “Just a moment ago he was a nice guy. After screaming some insulting nonsense for a while longer, he slammed a door and drove away fast and noisy.” Because Gure failed to receive Brown’s information, a private investigator visited her two days later to give her Brown’s name, date of birth, business address and the contact information for Brown’s lawyer, Mark Geragos. Gure also said she was given an expired insurance card for the singer’s Range Rover. According to a report, a body shop estimated noted Gure’s car needed $868 in repairs. 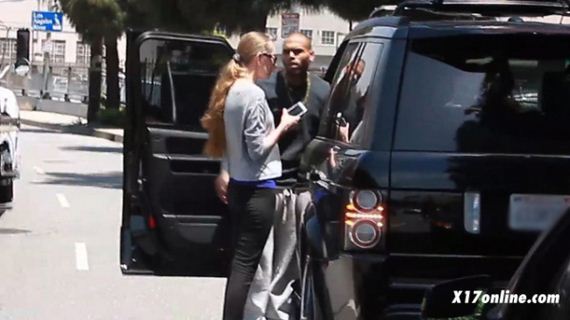 “The Rihanna Incident” Could Push Brown To A Sentence

After allegedly punching his ex-girlfriend Rihanna inside a rented Lamborghini on a Hollywood street on the eve of the Grammy Awards in February 2009, Chris Brown entered a guilty plea seven months later. He was subsequently sentenced to serve five years probation and to spend more than 1,400 hours in “labour-oriented service” for the assault conviction. The judge on-hand allowed Brown to serve the sentence in Richmond, Virginia, under the direct supervision of the police chief.

In a court filing in February 2013, prosecutors accused Brown of not completing the community labour that was assigned. According to District Attorney Jackie Lacey, the paperwork he submitted to show its completion was deemed “at best sloppy documentation and at worst fraudulent reporting”. Brown’s attorney, Mark Geragos, said the prosecutor’s filing was fraudulent and that he would ask the judge to call for a contempt of court hearing for filing false documents within the course. Because of the mishap, the prosecutor is asking the judge to order Brown to restart his 1,400 hours of community service under the supervision of a Los Angeles probation officer. Due to his recent hit-and-run accident, it remains to be seen if his community service will be reinstated as Brown could possibly have to serve part of his original five-year jail sentence that pertained to his assault charges. As it stands, Chris Brown is clearly stuck in a bad situation that could go South, and quickly. 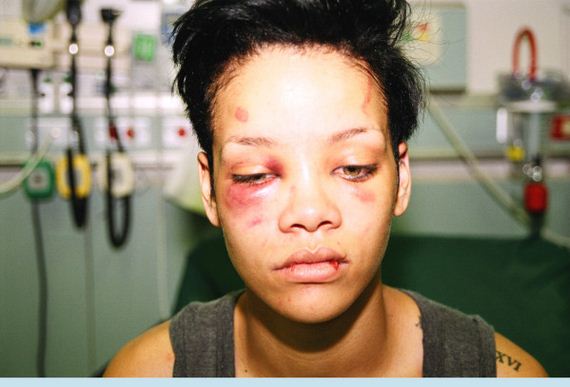 As if his management and publicity team didn’t already have their hands full, more than 10,000 people have signed a petition to stop Chris Brown from performing in Canada next month. As noted by the press, Nichole Snow launched the petition on Saturday July 13th to urge promoter Drop Entertainment’s radio station Energy 103.5 to cancel his set in Dartmouth, Nova Scotia.

“If Chris Brown performs and we give him our money, and literally put him up on a pedestal on our stage, then we’re guilty of glamorizing an abuser,” Snow said in a press release. News of Brown’s upcoming performance has made waves through social media and even provoked four corporate sponsors to withdraw their support of the show when he was confirmed as a headliner. Along with Canadian media giant Rogers, sponsors include Molson Coors Brewing Co., esthetics company Touch Of Radiance and the Halifax campus of the Centre For Arts And Technology. The Enery Rush Summer music festival is still aiming to include Brown as their headliner on August 31st despite the recent news of his probation and an opposition that seems to be spreading. As reported, a Winnipeg woman has announced she’ll protest Brown’s upcoming concert in Manitoba by staging a fundraiser for domestic violence victims. 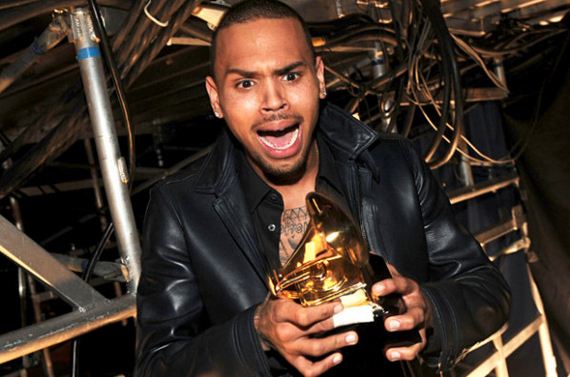 Though the threat of three to five years in a federal prison appears to be on the horizon, Chris Brown isn’t quite agitated yet by his probation being revoked. As updated by TMZ, Brown went out on the town in Hollywood on Monday night and was caught partying like a hip hop star at the Playboy Mansion. The singer was spotted getting smug with two women at a charity event to celebrate the MLB All-Star Game and was also seen next to Snoop Dogg and rising baseball star Yasiel Puig.

The candid party moment also came just a few hours after Brown took to Twitter to let his frustrations go. Between 2:58 p.m. and 3:28 p.m. on Monday July 15th he released a series of tweets stating, “Pray!”, “I did everything I was suppose to do during the so called hit n run, I provided the correct info. There were no injuries or damages. C’mon!!”, and “Love you Team Breezy. I hope people can actually see the truth”. A number of media outlets analyzed Brown’s revoked probation including MTV News who interviewed veteran Los Angeles-based criminal defense attorney, Mike Cavalluzzi, who stated the action is routine in situations where someone like Brown picks up a new criminal case. Cavalluzzi also noted that Brown’s only “facing tougher scrutiny” because of his celebrity status, the seriousness of his 2009 assault case and his further public contact with police that’s been seen in a negative light. In all likelihood, all of the above affects the final decision. “It could be anything from reinstating probation with no punishment, to extending his probation, to additional community service, jail time or state prison time,” said Cavalluzzi. 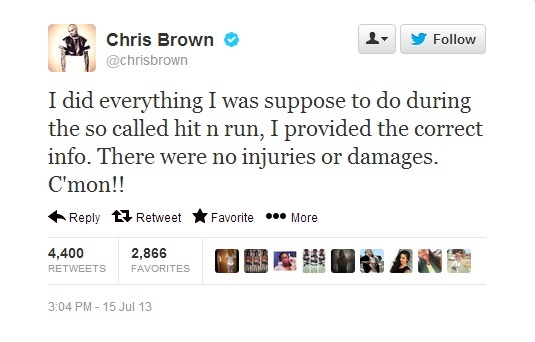