15 of the Most Romantic Gifts From Significant Others 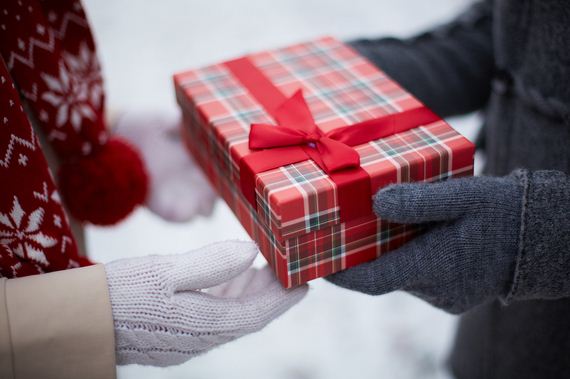 Flowers and candy are always welcome, but the truly memorable gifts are thoughtful ones. This week, one Redditor asked women what the most romantic gifts they have ever received were. Your heart is going to melt into a puddle on the floor when you read just how creative some people are. These significant others were really paying attention! Check out our favorite stories below.
A Gourmet Dinner

“One year we couldn’t spend my birthday together, so he sent me a care package. Inside was an instruction booklet titled ‘Romantic Birthday Dinner’ and beneath it were all the “ingredients” so I could cook it myself. Ingredients: Bread, Jelly, Peanut Butter. The killer for me was the ‘instruction manual’ – it was overly detailed and technical (he used the world ’emulsification’ like twice) with step-by-step picture guides. I was laughing so hard I was in tears. He literally bought me a PBJ for my birthday and it’s the best gift I’ve ever gotten.”
Light Up the Night

“My husband and I were at a friend’s destination wedding in the mountains a few years ago, and we got into an argument after the rehearsal dinner. Seeing as I was the maid of honor with a wedding to control the next day, and it was like 1 am, I left him outside to smoke a cigar and went to bed. Next thing I know at 3 am and he’s in my ear telling me to look up. I roll over, the room is pitch black save for the dozens of fireflies. He knew I’d never seen them before, so he spent 2 hours in the dark catching them by hand, then released them in our room at the cabin. Next to our wedding, that was the best night of my life.”
Space in His Heart

“For Christmas, my son gave his girlfriend (now fiancé) a reserved parking space in the city. (He leases the space in the alley of a homeowner.) She works crazy hours as a med student on rotations and would come home late at night exhausted, then have to drive for 30 minutes to find parking. Now she is grateful to him every day when she parks her car and has a safe, short walk to her apartment.”
Sci-Fi Story Time

“My boyfriend and I are both sci-fi nerds. He has dyslexia, and does not read well. I have over 300 books and love to read. So he gets me Sci-fi books and we snuggle as I read them to him. It’s super nerdy but it fits us. The best gifts are tailored to activities both of you enjoy. They bring you closer to each other, and can be enjoyed over and over again.”
A Package of Care

“I was going on a girls trip to Thailand and was really busy beforehand. He bought me a vacation package full of sunscreen for my face and body, aloe vera, SPF lip gloss, a book to read on the beach, travel size toiletries, travel converter, gum, flip flops, bug spray, and some small first aid things. All small and cheap things but he put the effort to think about things I would need and I thought it was very sweet and thoughtful of him!”
Thinking Inside the Box

“Last year my now husband and I were visiting his sister in Vermont, and walking thru a wood shop in Vermont where a man was selling his hand-carved items, and there was an absolutely gorgeous wooden jewelry box. All ornate compartments and scrolls… just beautiful. I saw the price tag and sighed. It was well worth the price but out of our budget. We went back home to Massachusetts and on our anniversary my husband gave me the jewelry box. I was so surprised! He had seen my expression when I looked at it, even though I never said a word. He arranged to pay for it and his sister picked it up for him, and he drove back to Vermont to get it without my knowing.”
Cheers to Love

“A crate of one of my favorite beers, which I’d told him had been discontinued. He was very proud of himself for finding it, and I had to explain that it had only been discontinued on tap. But I was still very happy with 24 bottles of it.”
Draw It Out

“We were in high school so he didn’t have much money. He commissioned an artsy classmate to illustrate a comic. I’m sure he didn’t pay her much, but she was happy to make some cash doing something she liked to do, and they sat down together and came up with a great story. It was an adventure tale about my beloved cat and I. I loved it and years later, I still have it and think fondly of him for thinking of such a creative gift!”
Where It Started

“He made me a keychain with the exact coordinates of where he proposed to me. It is stamped metal, and even though it’s a bit rough and slightly unfinished looking, it is one of my most charming treasured possessions.”
Staying Positive

“I used to battle with depression a lot. One Christmas I got a jar filled with little notes from my boyfriend at the time. All notes said things like ‘You’re beautiful’, ‘I’m so glad I met you’, ‘You’re my everything’ and things like that. It was one of the sweetest things I’ve ever gotten.”
Play on Repeat

“For my birthday, my boyfriend got each of my friends to record a video birthday message using their webcams, and edited all of them together into a compilation. This even included our friends who moved away to live in far-flung places around the world, so it way really amazing. He ended with a video clip of his own birthday wishes (we’re in a long-distance relationship). As soon as I realized what it was, I cried. It cost him nothing, but it is by far my most treasured gift.”
Best-Kept Memories

“My boyfriend kept all of our tickets and maps and receipts from our euro trip and made me a scrapbook with our pictures and all of the things we had collected along the way. I cried. Twice.”
Sweet Sipping

“He bought a plain white mug, then painted it with me. He even painted his bottom lip red and pressed it onto the cup so that whenever I have a sip of coffee, it’s like I’m giving him kisses.”
A Night of Adventure

“I’m from the St. Louis area and we don’t have The Rainforest Cafe there. It was always someplace I dreamed of going as a kid, but my parents were always like, “we’re not paying to eat overpriced chicken nuggets in the dark with animatronic animals.” Whatever. Fast-forward to when I’m an adult and dating this guy for 2+ years. We’re in Chicago for my birthday and he surprises me by taking me to the Rainforest Cafe to fulfill my childhood dream. When we sit down, he pulls out two safari hats, puts one on his head and hands the other to me. Then he pulls out a stuffed elephant shrew, which is one of my favorite animals. I’m holding the elephant shrew, still in shock, and my stoic, no-nonsense engineer boyfriend is sitting nonchalantly across from me wearing a safari hat. No idea where he found a stuffed elephant shrew. The whole thing was such a sweet, goofy gesture, especially for him. I teared up.”
Something to Cuddle

“When I was 17, my 19 year old boyfriend made me a teddy bear. It was the ugliest damn teddy in the world, but the fact that this tough silent guy made it was amazing.”

Tags From Gifts Most Others romantic Significant