10 Most Powerful Women In Music 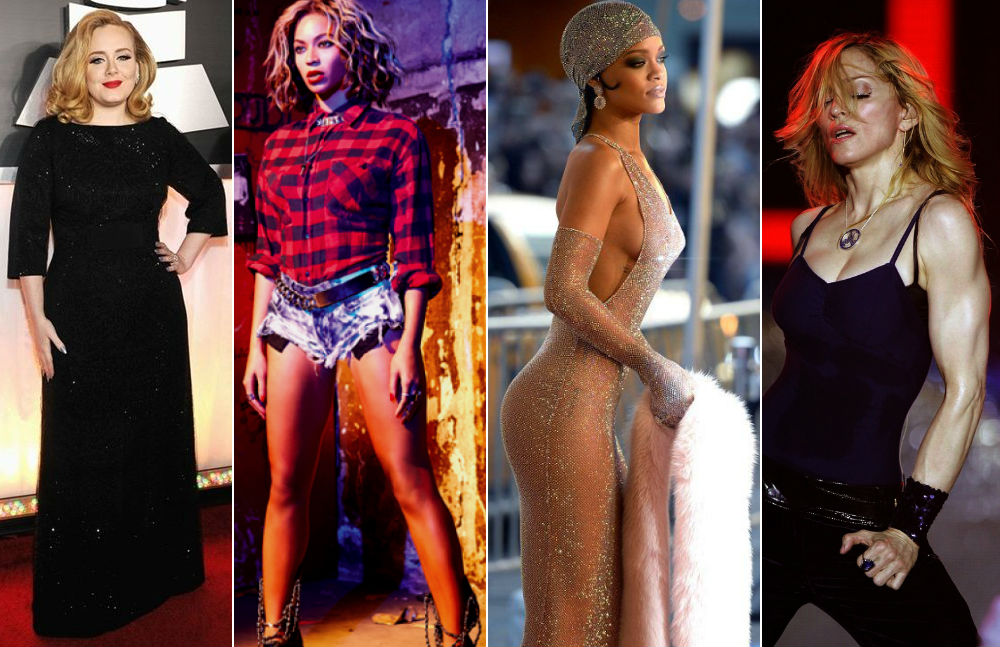 First and foremost let’s state that the list is completely arbitrary. There’s no reason these women are mentioned in this order. From first to last all of these women are extraordinarily talented and incredibly skillful. The only reason we’re making this into a list is because you can’t talk about them all at once without it becoming an unintelligible mass of fangirling. So here’s a slightly more structured list of awesome musicians accompanied by a bit of fangirling and adoration for their work.

1. Madonna
Every single “powerful women” or “inspiring women” or any other “top women” list when it comes to music should start with Madonna. That’s my personal opinion and really, it should be the law. Because that’s where it all started. If there was no Madonna, there would be no Beyonce, Lady Gaga, Rihanna, Katy Perry or anyone else that you love and adore now. She’s the inspiration behind all those famous women in pop music that are popular now. Music world is always changing, pop sensations – they come and go, but Madonna stays. And there’s a reason for it. She’s extraordinary in that sense. She never set out to follow trends, or blend in. She leads, she creates new trends, she influences people. And it’s not all about pointy bras or shocking performances or being explicit. It’s her attitude. She’s a woman who set out to conquer the world, and she succeeded. Madonna is an icon. To this day I haven’t met a person who hasn’t heard of Madonna. Think about it, no matter who you’re talking to and no matter what kind of music genre they’re into, or if they’re not into music at all, you never have to explain who Madonna is. They just know. And if that’s not a sign of her power than I don’t know what is.

2. Beyonce
Flawless. That’s the first word that comes to mind when trying to describe Beyonce. After spliting from Destiny’s child she’s released 5 albums. All of them debuted at number one in the charts. That makes her the first woman in the history of charting songs, albums and artists popularity to do that. She’s a musician, philanthropist, modern day feminist, has fashion lines and teams up with famous designers and shops all the time, and she has a husband and she’s a mom. Beyonce has won 20 Grammy awards. She’s founded and contributed to many charities and foundations. She’s an inspiration to many. Her last visual album (it had a music video for each song) came out unannounced, it just appeared in shops and on iTunes without any PR or advertising, and sold 1 million copies in less than a week! Managing such a versatile life can’t be easy, but Beyonce manages it just fine, proving that she can do anything she wants and achieve any goal she sets for herself. How? Cause she’s Beyonce.

3. Lady Gaga
Lady Gaga made it in the music industry by being different and accepting the fact that she’s a bit of a freak. There’s nothing wrong with being different or strange. She’s proven that there are a lot of people who feel like they’re outsiders but that doesn’t mean that they have to be outcasts of society. By being unique and original and lets face it, sometimes looking really crazy, she found a huge and very devoted following. She has a really special relationship with her fans and calls them little monsters and she’s their monster mother. She’s also a philanthropist and a huge supporter of the LGBT rights movement. She has 13 MTV Music Video awards, 6 Grammys and what’s most impressive 13 Guinness World Records. From her outrageous costumes and hairstyles to incredible theatrical performances, Lady Gaga is an exceptional pop star.  The best thing about Lady Gaga is that she clearly doesn’t give a damn about what others think. She was born this way.

4. Rihanna
Rihanna is a brilliant example of how taking chances and not giving up can lead to great success. She was born in Barbados and spend her childhood helping out her father sell clothes from a booth. She was also greatly affected by her father’s drug and alcohol addiction. Nonetheless she managed to make it in America and become one of the best-selling artists in the world. Everyone remembers the huge scandal with Chris Brown that prevented her from performing at the Grammy awards. But Rihanna will not be stopped. Her talent, passion for her work is worthy of admiration. Rihanna is not afraid of reinventing herself. She’s famous for changing her style both musically and in the fashion sense and that’s what keeps her always new and interesting. She has defined, perfected, and embodied the “bad bitch” trope like nobody before or after in a way that is empowering and worthy of admiration.

5. Taylor Swift
Swift emerged as a country girl and that’s how we got to know her at first. That’s what was charming and unusual about her and it was awesome. In a very short period of time she managed to completely reinvent herself, her style, her music and everything about her and become even more awesome. She’s a pop phenomenon. Her songs are incredibly catchy, and even people who don’t like Taylor Swift’s music, still like and respect her as a person. Something that sets her apart is that she’s incredibly level-headed despite her extreme popularity. That’s unheard of. Most people who’re that successful that early on in life kinda go crazy. Justin Bieber, Miley Cyrus are good examples to name a few. Taylor, however, managed to stay completely unaffected and surprisingly normal. She’s also very relatable and unlike most celebrities her age, she doesn’t take herself seriously. She can laugh at herself and joke about herself. She directly acknowledges all the press speculations and rumors about her in her songs, for example in “Blank Space” and “Shake it Off”. She keeps is real and that’s something that’s worth admiring. So no matter if you like it or not, Taylor Swift is here to stay.

7. Katy Perry
Most people were sure Katy Perry was a one hit wonder. We all expected her to ride the wave with that one song and then just disappear as all pop artists do. But oh no, she had much more in store. She’s the first women to have 5 number one songs from 1 album! You know who else did that? Michael Jackson. Yeah, she’s tied with Michael Jackson. She’s also a great role model when it comes to not caring what people think. She said it multiple times in interviews. She doesn’t care what people say about her costumes or songs. She pokes fun of herself in her music videos, they’re almost parodies. She does what she likes and she works hard. She takes nothing for granted. Katy knows that there are millions of girls who would do anything to have what she has so she cherishes it.

8. Adele
Adele is incredible. She’s glamorous, cute, funny, possesses an awesome fashion sense and loves to swear! What’s not to like? She also is incredibly talented. You don’t get 8 Grammys and an Oscar at 24 without being one helluva talented lady. She’s become a legend at age 21. Her album was number 1 for 13 weeks! She’s also our only hope when it comes to realistic representations of women. She loves food and doesn’t care what people say. She’s the proof, that you don’t have to look like a model to achieve great success. So she’s not size 2, so what? As she said, she loves Katy Perry and her skintight dresses, but that’s not her style. She makes music for the ears, not the eyes. And that’s very true. Her music is beautiful, her voice incredible and her lyrics heartfelt and relatable. She’s not afraid to show real emotions and that’s what makes her so damn important.

9. Amy Winehouse
Even though her career and life was tragically cut short, there’s no doubt that Amy Winehouse was one of the best British artists. She made a colossal impact on the world of music and basically single handedly brought soul music back onto the charts. Despite the fact that she struggled with alcoholism and drug addiction she never promoted it. On the contrary her songs depicted the dark side of addictions. She’s also one of the few female artists who didn’t conform to how people expected pop stars to look. She never used her looks to further her career, on the contrary she only dressed the way she liked, even when her managers told her not to. She was called ugly multiple times in the media, but did she care? No. She relied on her voice and talent and that was enough. She was a wonderful and extremely talented artist and it’s a shame she died so young.

10. Patti Smith
Patti Smith is basically the Godmother of Punk. Punk has always been a genre of music that was run and dominated by men. It’s a boy’s club and no girls are allowed. Well, Patti Smith did us all a huge favor and paved the way for girls into punk. And not in any kind of girly fashion. Patti Smith can stand her ground when it comes to pioneering punk. She did something no one has done before. She combined poetry and punk and the result was legendary. Her album Horses is one of the most famous albums in the world and has had a huge impact on the punk scene in New York in the 1970’s. Patti is a poet, a badass, and one of the few musicians you can truly call an icon. She’s always been unapologetically herself throughout her career.