‘The universe was trying to teach me a lesson’: Madonna speaks to Jonathan Ross about THAT BRIT Awards fall… and claims she ‘created a horror show’

It’s the fall that the world is itching to hear more about, especially from Madonna herself.

And fans will only have to wait a little bit longer to see the superstar singer speak only about the headline-making stumble she made at the BRIT Awards on Wednesday, as she is set to appear in a very special episode of The Jonathan Ross Show, which will air in mid-March.

Speaking to the humorous host about the spectacular moment while on the TV couch, the 56-year-old admitted that it was a ‘horror show’ after the performance went horribly awry. 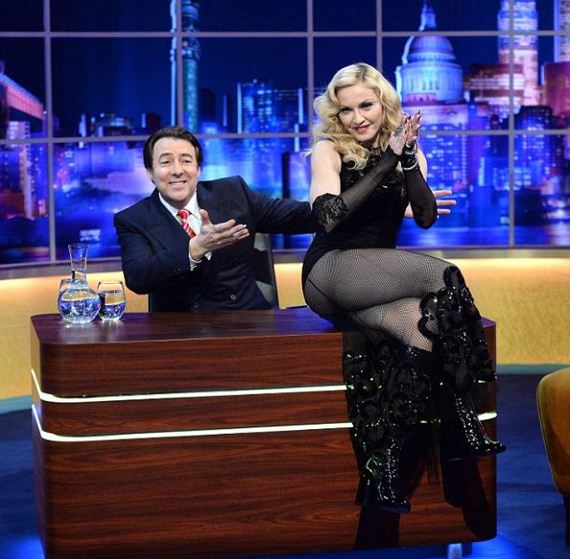 A very special appearance: Madonna opened up about her BRIT Awards backwards stumble on a special episode of The Jonathan Ross Show, which is set to air on March 14

The iconic singer had been performing her new single Living For Love during the live finale at the music awards ceremony on Wednesday night, when she failed to untie her costume cape in time, meaning she was dragged backwards down a set of steps.

The internet erupted in horror as she fell, but she picked herself back up again and continued to sing her way through the song.

And, during a filming on The Jonathan Ross Show, she revealed that it wasn’t a set-up, as some nay-sayers had claimed.

Shaking her head after the host asked what she thought of the stunt suggestions, due to the nature of the lyrics in the song which referenced a fall, she said: ‘I’m never writing lyrics like that again! The universe was trying to teach me a lesson I guess.’ 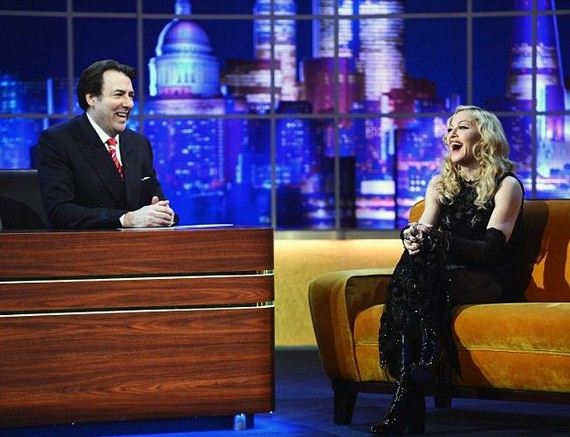 ‘So here I am marching in like a queen and I got to the top of the stairs and I pulled my silky string and it would not come undone and my two lovely japanese dancers basically strangled me off the stage. I had a choice, I could either be strangled or fall with the cape and I fell.’

The Queen of Pop also explained how – after being asked about not having a bruise on her backside by Jonathan – she hurt her head instead of her posterior. 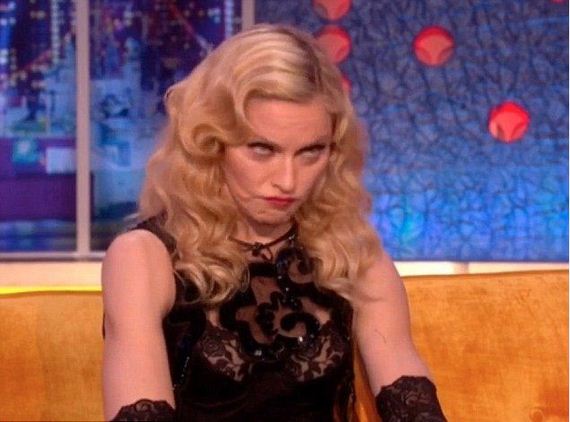 No stunt! When asked what she thought about rumours of a stunt, Madonna shook her head and blamed the ironic lyrics of her new single, Living For Love 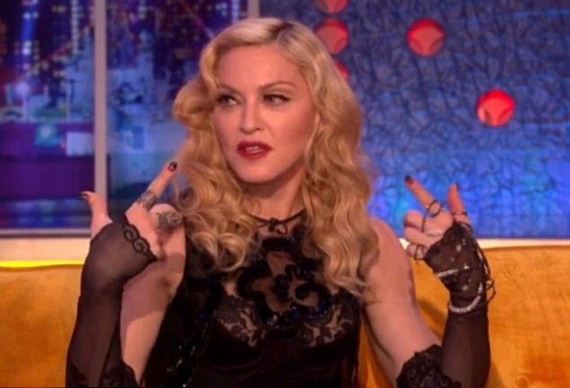 I didn’t hurt my butt, I hurt my head. I did. I know how to fall, I’ve fallen off my horse many times and I tucked and I have good core strength,’ she explained.

‘But the thing is, I had a little bit of a whiplash and I smacked the back of my head so there was a man standing over me with a flashlight until about 3am making sure that I was still compos mentis.’

‘I actually created a horror show for everyone,’ she joked.

Also in the revealing interview, she touched on the drug-related lyrics of another song of hers, put to her by Jonathan, according to The Daily Mirror.

Speaking about her track Devil Pray, which includes the lyrics “we can get high, we can get stoned, we can do Es, we can do acid”, the open-minded singer admitted that she personally doesn’t like to take drugs after trying them herself, but that she couldn’t tell her children not to try for themselves. 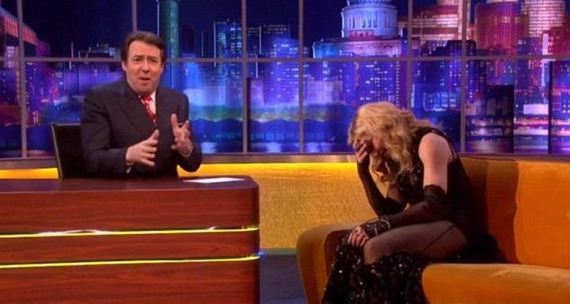 Madonna revealed she rehearsed time and time again for the performance during the BRIT Awards finale, only for it to go horribly wrong due to a cape malfunction

‘I am not a big fan of drugs. They just don’t suit me,’ she confessed. ‘The handful of times I have tried drugs, many many many many years ago, I just didn’t enjoy it. I wanted it out of me. I started guzzling bottles of water thinking that was going to end it.’

The interviewer then pressed about how she discusses such a thing with her children – Lourdes, 18, Rocco, 14, Mercy, nine, and David, also nine.

‘I just ask my daughter [Lourdes] to make wise decisions and to do things in moderation and to try not to mix her alcohol,’ she divulged.

Surprisingly, she also spilled the beans about a latent desire of hers: to become a comedian.