The 20 Most Risque Outfits in Red Carpet History

How low is J.Lo willing to go? By the looks of this bosom-baring, belly-revealing Versace dress that she wore to the 42nd Grammy Awards, she’s not afraid to flaunt it all. 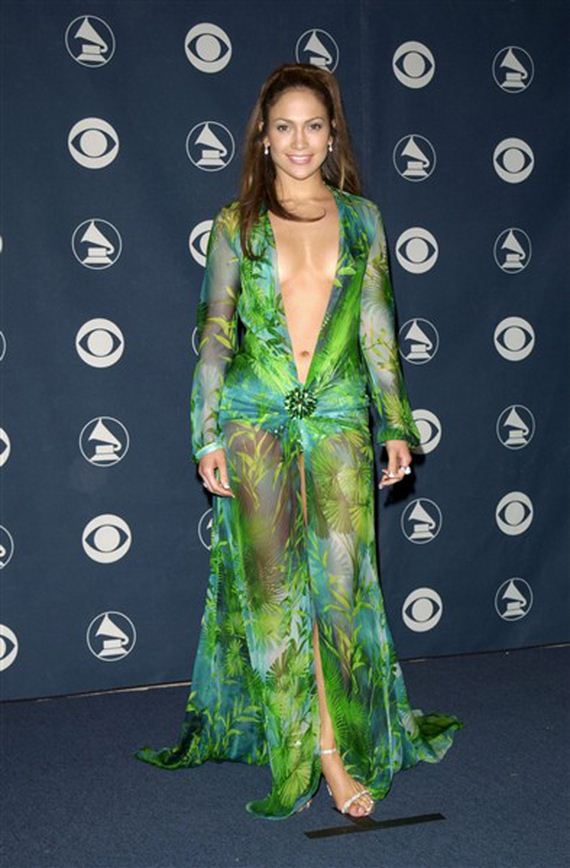 Kristen could’ve walked the “Breaking Dawn: Part 2” red carpet in Los Angeles naked. But nah, she decided to cover up with a little nude lace. Way to keep it modest, K-Stew. 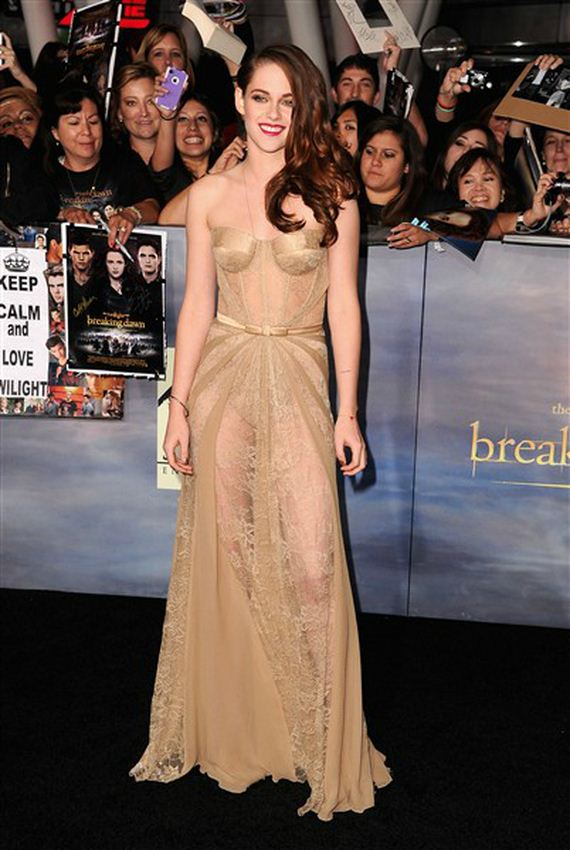 It’s crazy to think that this photo of Ms. Braxton was taken 12 years ago. But for those who remember this white-hot red carpet moment — do you also recall blushing a little when the songstress stepped out in this racy dress? We do! 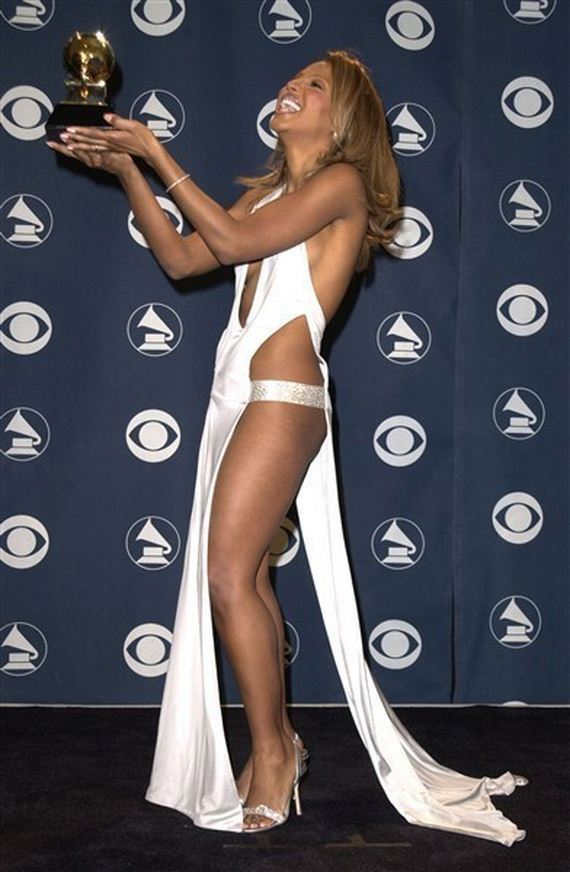 The pop star became every adolescent boy’s “Teenage Dream” when she stepped out in this barely there sparkly number at the 2010 MTV Movie Awards — leaving very little to the imagination. 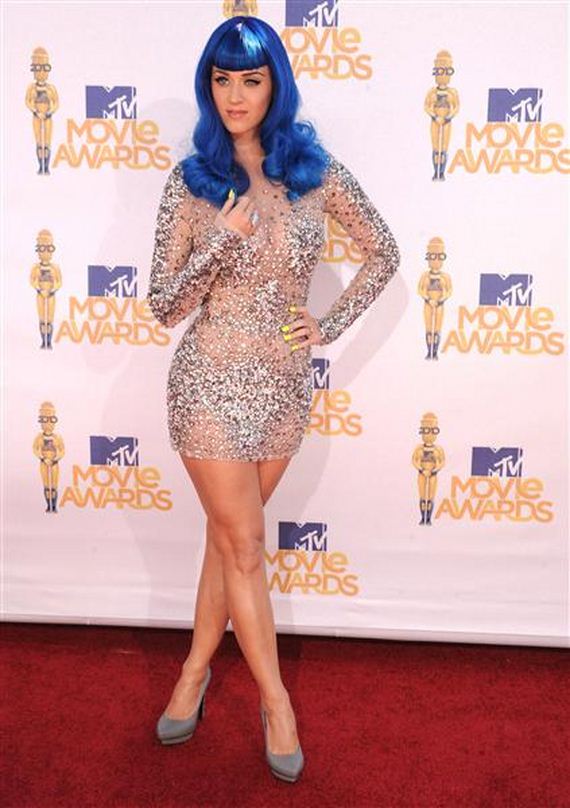 Sure, Jean Paul Gaultier has been known to get a little spicy with his designs — after all, he created Madonna’s iconic cone bra. But was Fergie’s orange lace attire, that exposed everything including her black two-piece, verging on inappropriate? You be the judge. 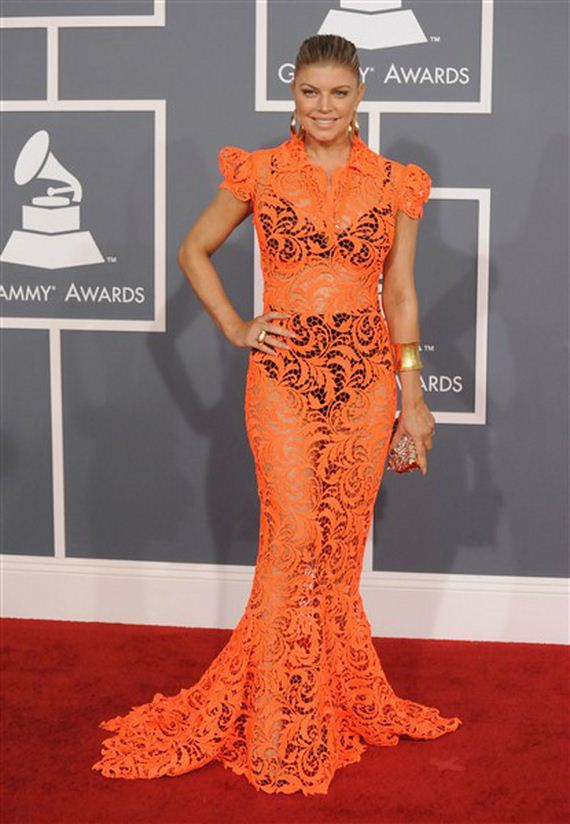 Man, oh man. It must’ve been painful when Carmen had to peel that gown off of her. Especially with all the dress tape she had to use to keep it up. Ouch!

If you love Coco as much as we do, then you appreciate her always-bawdy garb — like this genie-in-a-bottle-inspired look. Wonder what would happen if you tried rubbing her the right way… 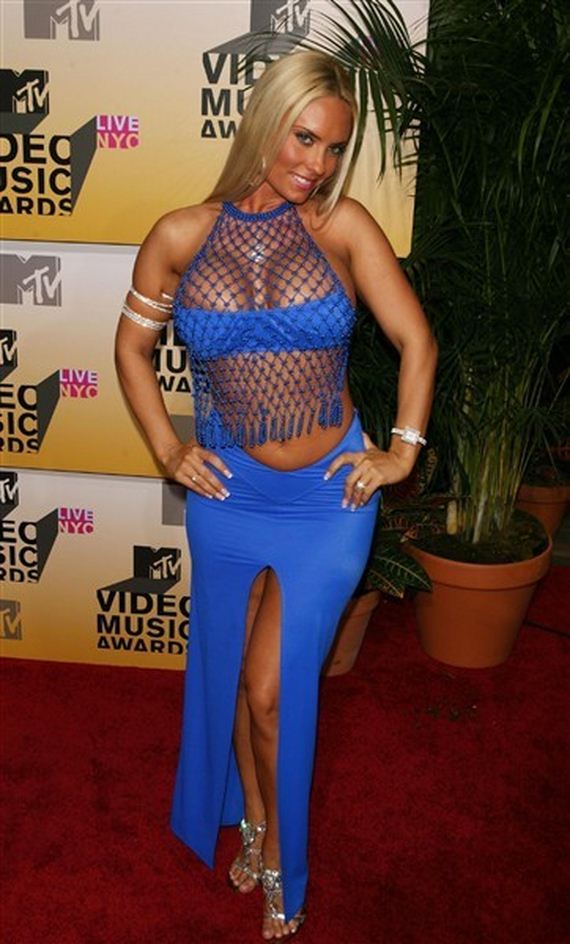 13: Beyonce
Bey’s backside proved to be “Bootylicious,” when she got cheeky in this sheer black Givenchy gown at the 2012 Costume Institute gala for the exhibit “Schiaparelli and Prada: Impossible Conversations.” 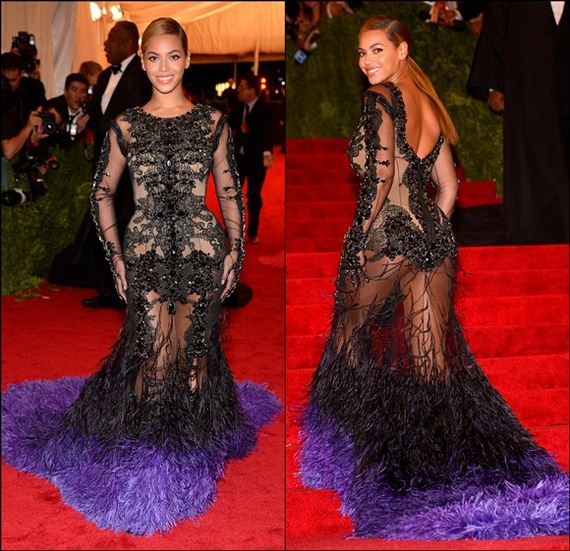 Back in the day, the petite rapper would do anything for a little attention — like intentionally forgetting half of her top when she arrived at the 1999 VMAs. Thank goodness for pasties. 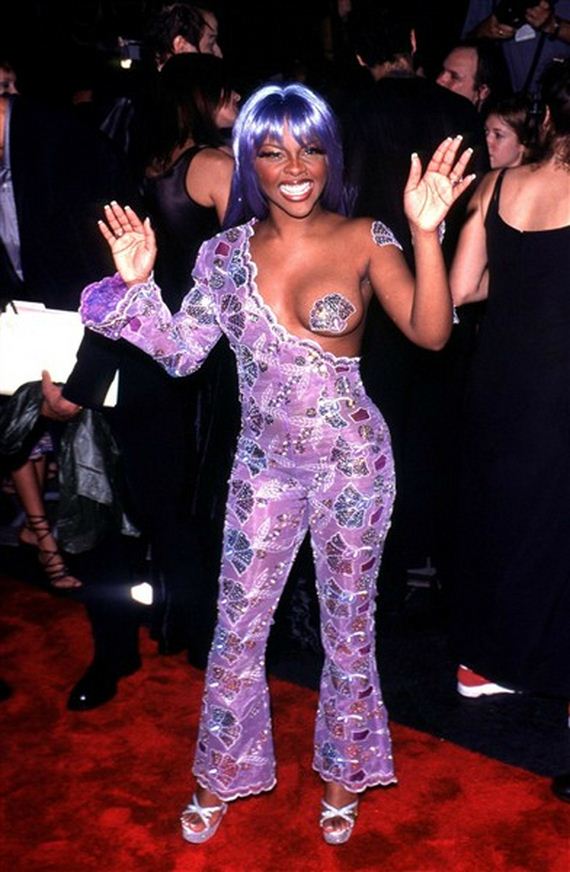 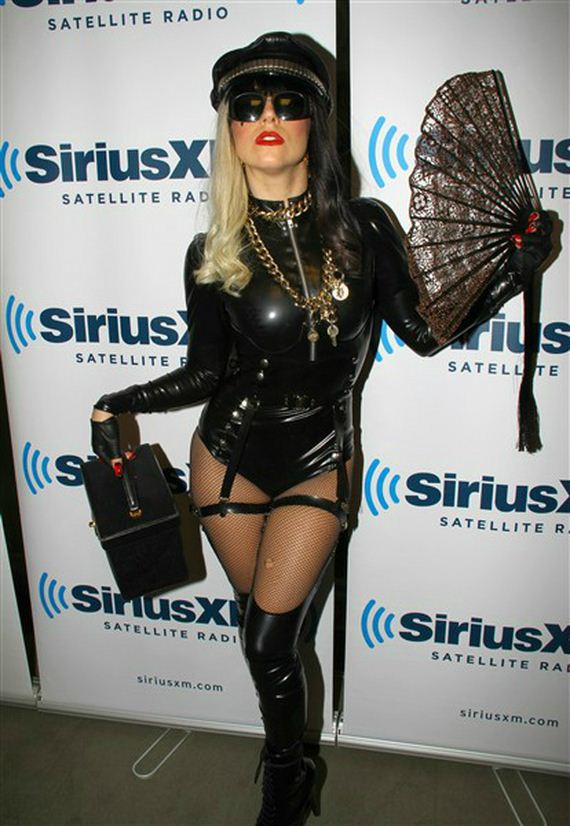 10: Britney Spears
Coming in at No. 10 is the nude sparkly ensemble that paved the way for dozens of pop stars to don bodysuits onstage in the future. After Britney Spears stripped down to this revealing two-piece during the 2000 VMAs, starlets began imitating her look to prove they’re “not that innocent.” 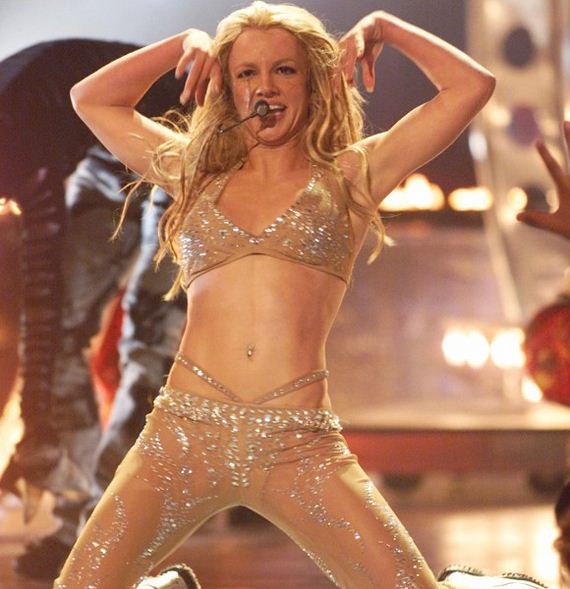 9: Miley Cyrus
Smiley’s attempt to convince us that she has shed her innocent image is LOL-worthy. She didn’t fool us when she hit the stage in her gangsta-inspired getup. 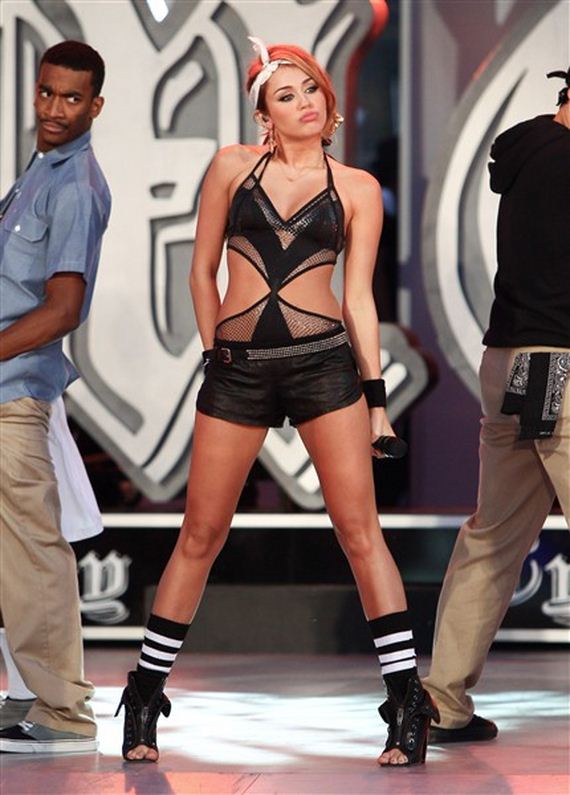 8: Nicki Minaj
“The Mistress” looked more boudoir ready than red carpet appropriate when she celebrated her 26th bday in Sin City — thus we can only assume that she woke up saying, “What happened in Vegas, stays in Vegas.” 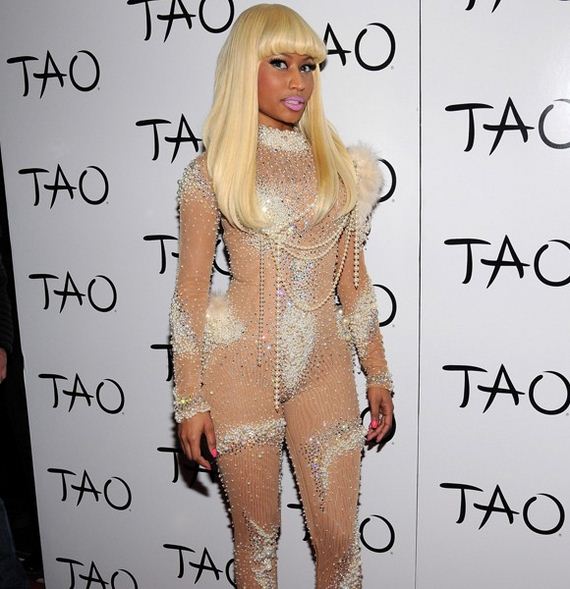 7: Jenna Jameson
The former adult star looks so stiff because she knows that just one wrong move and her whole bodysuit would unravel in a split second. Good thing she’s already at a gentlemen’s club … 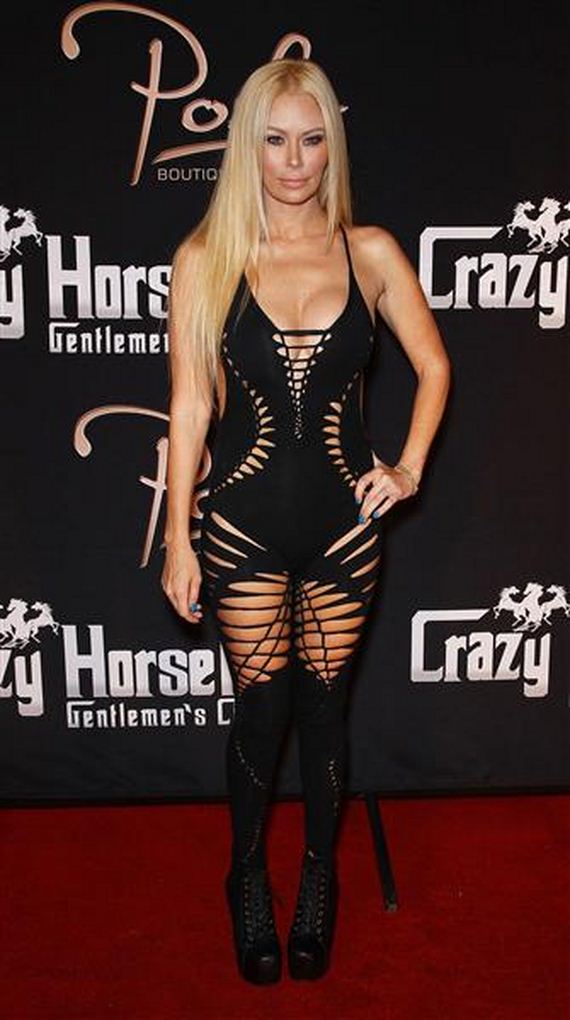 6: Christina Aguilera
Let’s be honest. How many of you tried to replicate Xtina’s 2002 VMAs look for Halloween? Seriously. It was easy and just a little “Dirrty.” 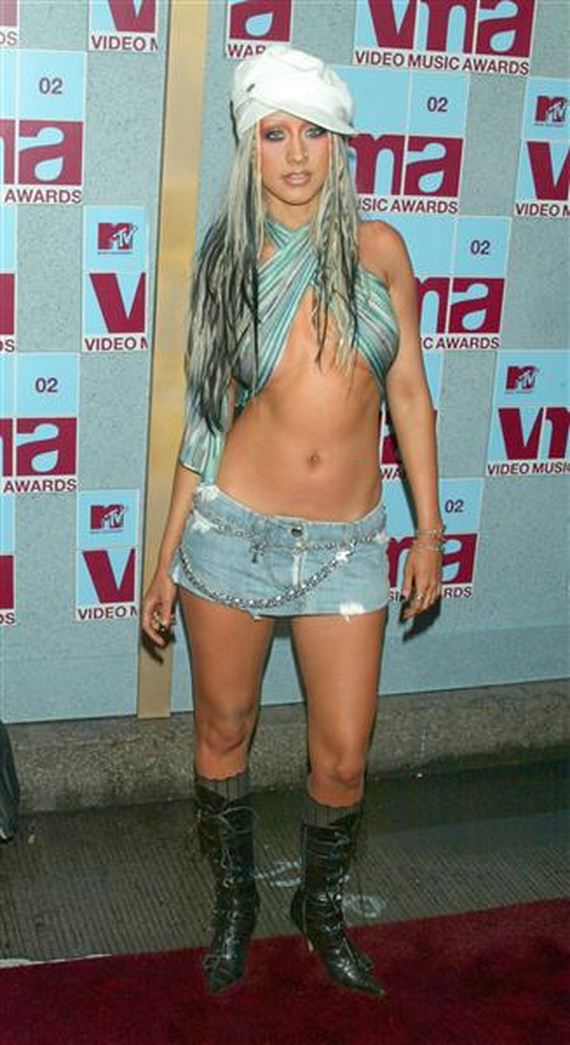 5: Traci Bingham
How did fashionistas celebrate the turn of the millennium? By gluing rhinestones to about anything, including trucker hats, belt buckles, cowboy shirts, T-shirts, sunglasses and more. But the “Baywatch” beauty took her love for sparkles one step further when she applied baubles to her bosom in 2001. 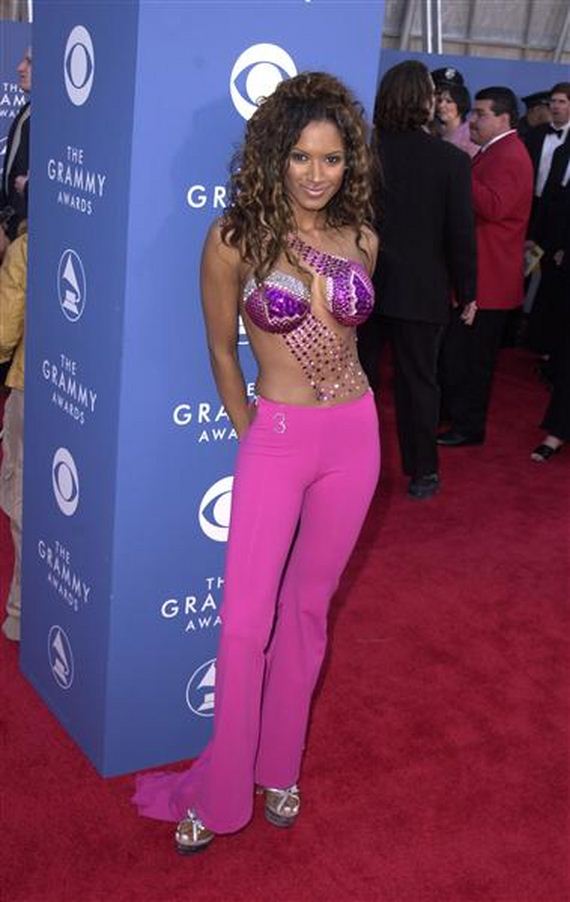 4: Erin Wasson
If only we were a fly on the wall when Erin paraded down the red carpet during the 2012 Golden Globes in this non-existent dress. We could only imagine how many disapproving looks significant others gave their partners in response to their drooling stares. 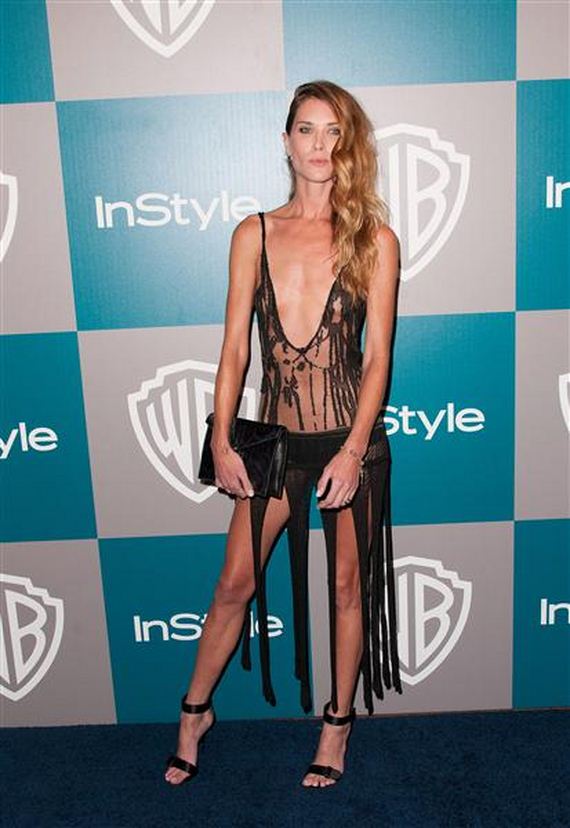 3: Aubrey O’Day
Why even wear bikini bottoms, when they’re as low as Aubrey O’Day’s? Actually … we take that back. 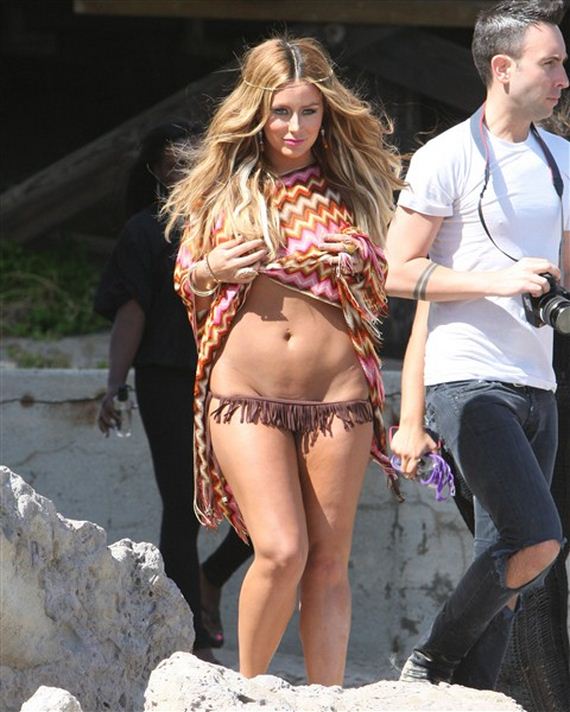 2: Rose McGowan
Just when you thought that no one could upstage the shock-rocker Marilyn Manson, his ex-ladylove took offensive fashion to a whole new level in this string dress to the 1998 VMAs. 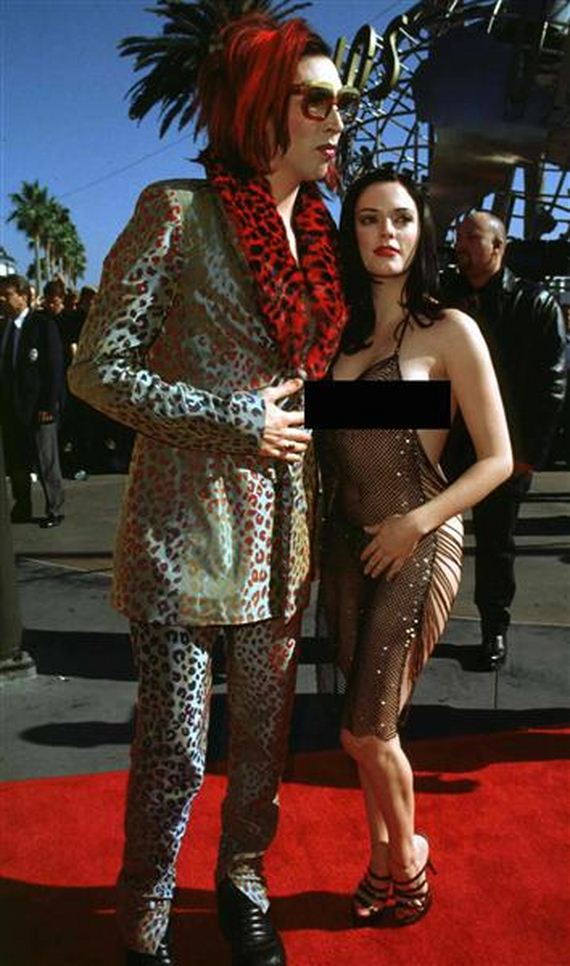 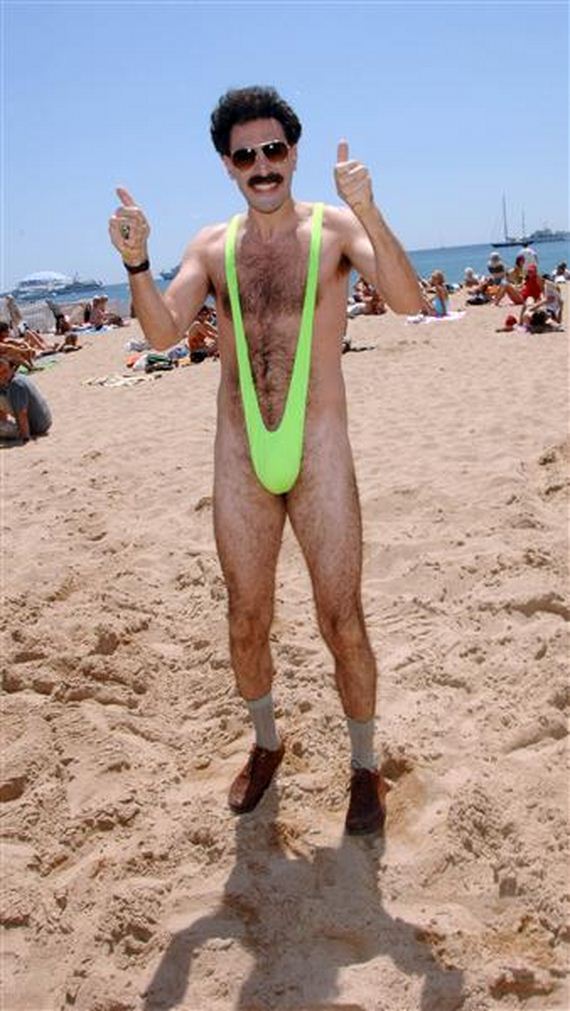