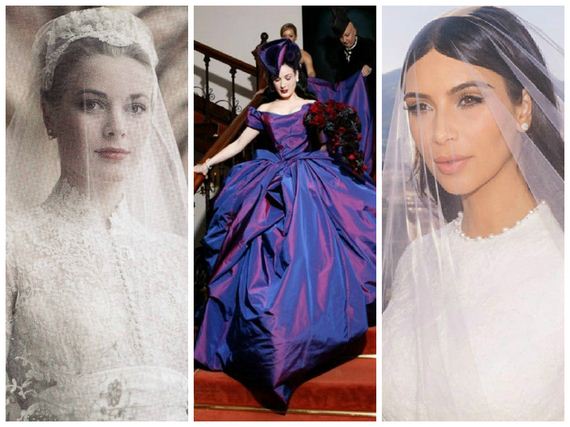 Every future bride has dreamed about finding a perfect wedding dress since her childhood. Celebrities are no exception. The only thing sets celebs apart from regular people – the whole world is staring in awe appreciating the stars’ fashion choices. We’ve gathered the most iconic celebrity gowns for you, from elegant and sophisticated to extravagant and pretty weird. If you are about to get married and still have not found an ideal wedding dress you definitely need to check out the gallery to get inspired. If you are not getting ready to head down the isle – check it out anyway to perk up your mood. 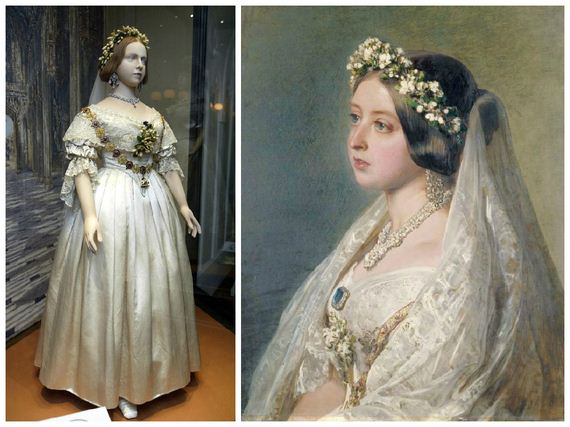 In February 1840 Queen Victoria wore a stunning gown when she married Prince Albert. She looked absolutely devine. Wearing a white wedding dress is still in trend. 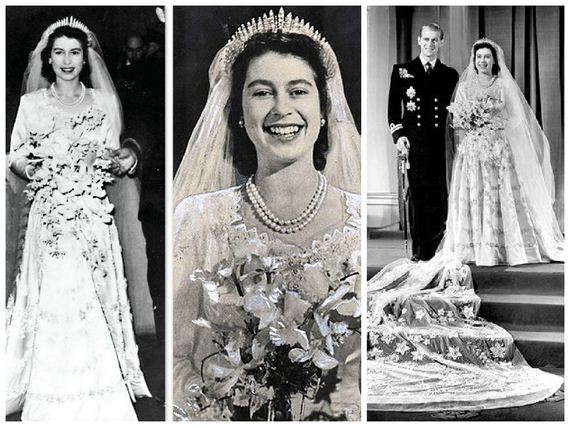 In November 1947 Queen Elizabeth II tied the knot with Prince Philip. The world gasped with excitement when Her Majesty appeared in that amazing gown. The dress was made of ivory satin, decorated with 10,000 white pearls, and silver thread. Queen Elizabeth II also wore a silk tulle veil held by a tiara lent by her mother. 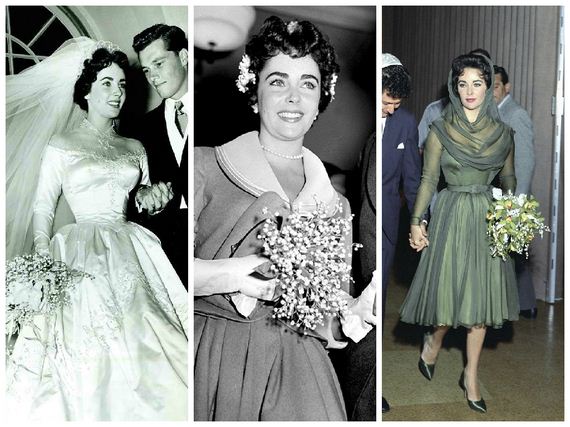 These are three most beautiful dresses Elizabeth Taylor wore at her seven weddings, each of these was awesome. The first one she wore when she married her first husband Conrad Hilton in 1950. In 1952 she rocked her second dress when tying the knot with Michael Wilding. And the world saw the third one when Elizabeth got married with her fourth husband Eddie Fisher in 1959. Which one do you like the most? 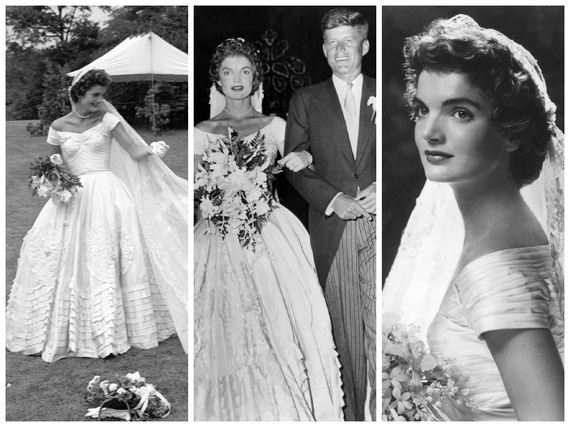 Jacqueline decided to wear a gorgeous gown created by famous NY designer Ann Lowe. She looked absolutely marvelous when walking down the aisle with John F Kennedy in September 1953. The first lady complemented it with the full veil and white gloves. 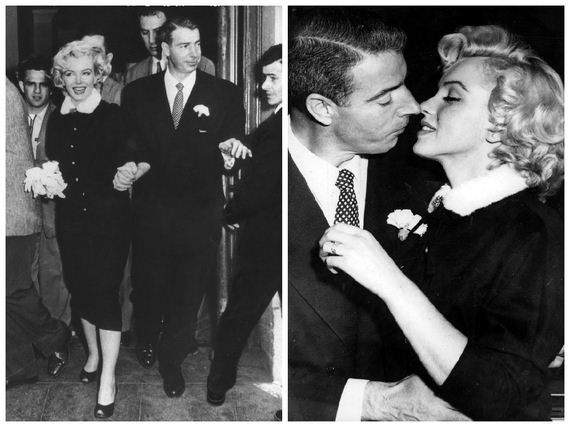 In January 1954 Marilyn tied the knot with Joe DiMaggio. The Hollywood beauty surprisingly decided to rock a black skirt suit. She looked very gorgeous. But do you actually likeher wedding dress choice? 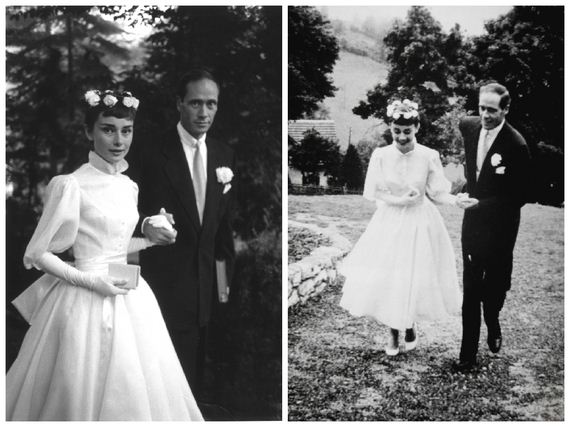 The stunning starlet flaunted a ballerina-length dress on her big day when she married Mel Ferrer in September 1954. She looked super stylish and fabulous like a princess. Audrey complemented her dress with white roses in her hair. 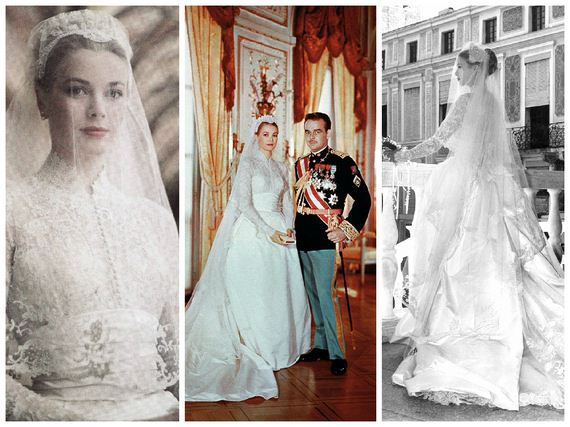 In April 1956 Grace Kelly became Princess of Monaco when she married Prince Rainier III. Three dozen seamstresses worked on Grace’s amazing gown for six weeks. It is one of the most legendary wedding dresses ever. Helen Rose, the MGM designer, used 25 yards of silk taffeta, antique rose-point lace and pearls to create this masterpiece for Princess of Monaco. 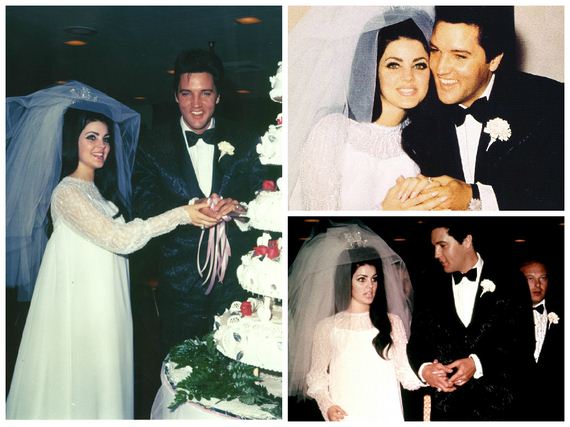 The wife of the legendary Elvis Presley, Priscilla, designed her own wedding dress. She looked absolutely marvelous and stylish. In May 1967 the couple tied the knot in Las Vegas. 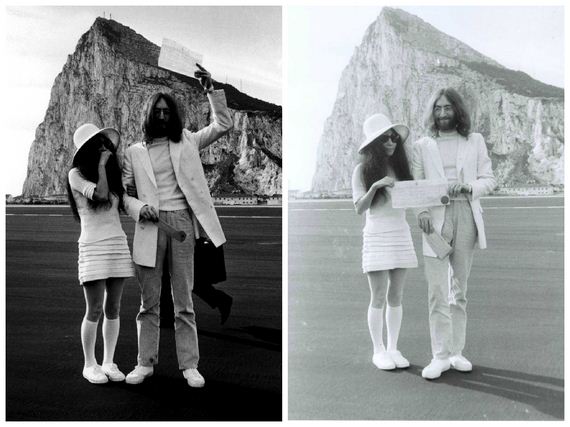 The infamous couple, John Lennon and Yoko Ono, got married in March 1969. The gorgeous bride chose a white minidress for this special occasion. She managed to pair it with a white hat and black sunglasses. She looked pretty extravagant yet stunning. 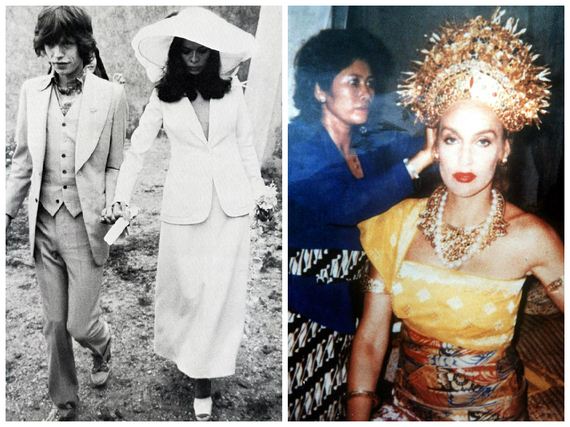 Both of Mick Jagger’s wives Bianca and Jerry decided to flaunt unusual and pretty extravagant wedding dresses. In May 1971 Bianca rocked a gorgeous white skirt suit. In November 1990 Jerry Hall stunned everyone with a Balinese dress since the couple had an unofficial Balinese ceremony. 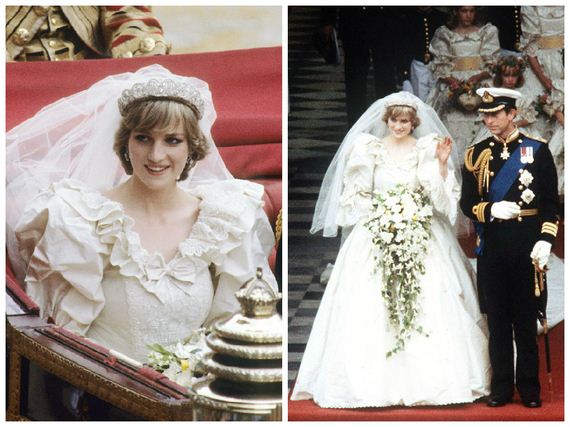 In July 1981 millions of people couldn’t wait to see The Honorable Diana Spencer and Prince Charles’ wedding. Her gown was enormous and seemed never-ending. It is the longest bridal dress in royal history. It was decorated with 18-carat gold horseshoes with diamonds. 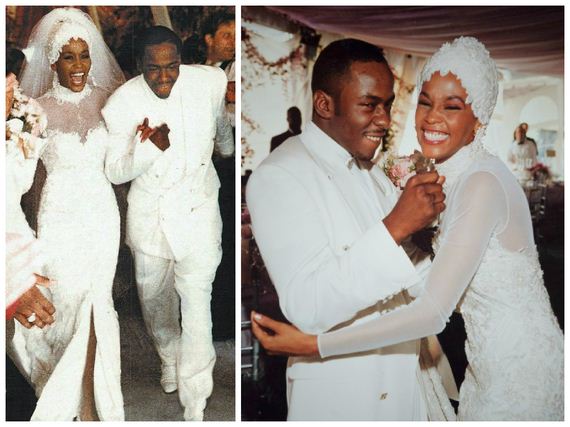 Whitney Houston wowed everyone with her wedding look in July 1992 when she tied the knot with Bobby Brown. The star wore a very beautiful dress and managed to pair it with a pretty extravagant veil. 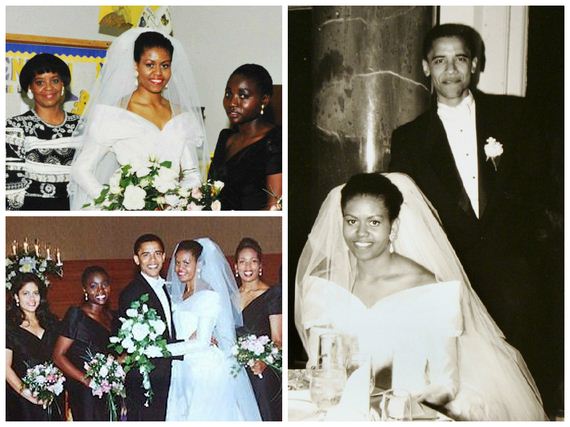 The first lady looked especially elegant and stylish on her wedding day. She wore a gorgeous full-skirted gown. Michelle and Barack Obama got married in October 1992. 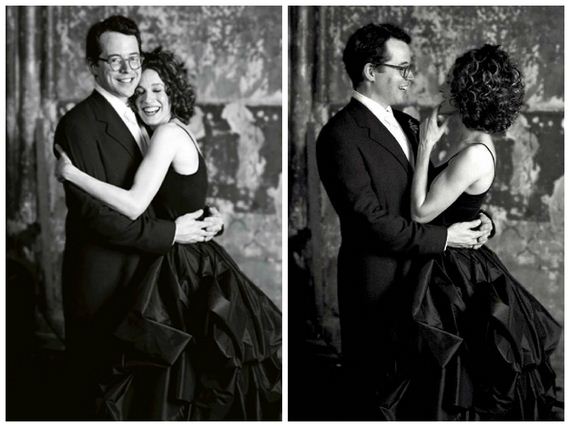 In May 1997 Sarah Jessica Parker said “I do” to Matthew Broderick. She decided to rock an usual wedding dress. It was all black and a little bit reminiscent of those extravagant dresses worn by the character, Carrie Bradshaw. Do you like her choice? 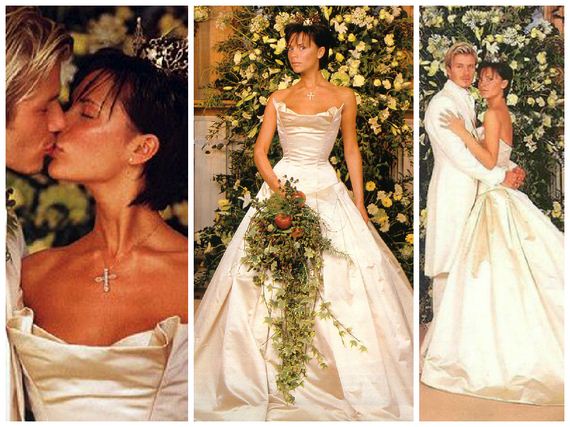 Victoria Beckham looked as fabulous and stylish on her wedding day as she always does. She wore a Vera Wang gown. Her husband David Beckham was absolutely handsome too. The gorgeous couple looked like a prince and a princess when they got married on Independence Day in 1999. 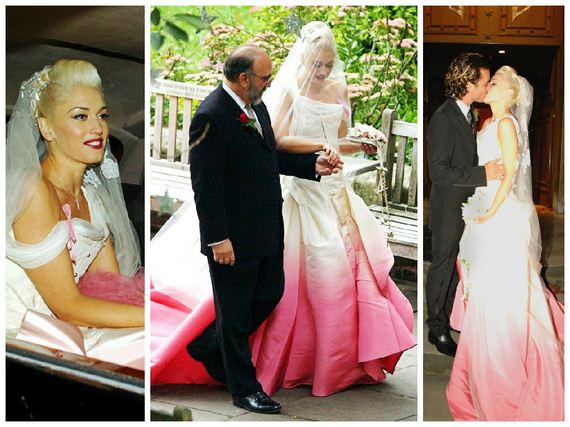 Gwen Stefani’s fabulous dress with the pink bottom was designed by John Galliano. In September 2002 the star flaunted it to astound her groom Gavin Rossdale. Gwen looked really fantastic. 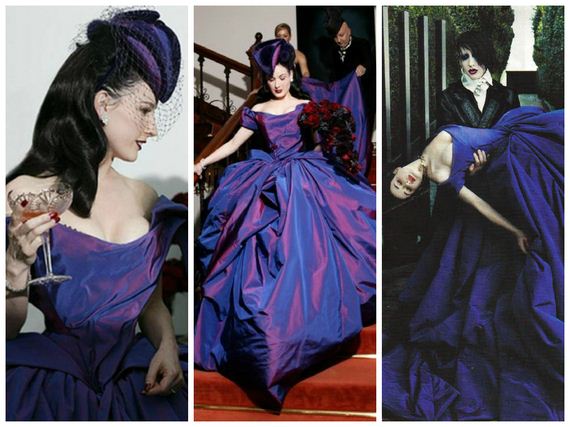 Vivienne Westwood created that marvelous purple dress especially for Dita when the beauty decided to tie the knot with Marilyn Manson in November 2005. The star looked extravagant yet so amazing. Do you agree? 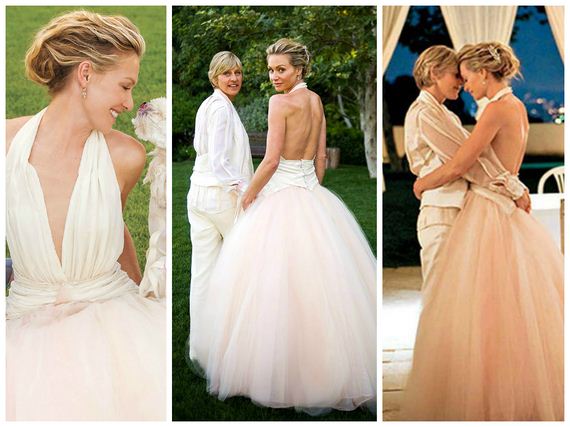 Portia mesmerized everyone with her fascinating gown. She looked feminine and sophisticated. Ellen decided to pull off a gorgeous white suit. Our favorite couple Ellen DeGeneres and Portia de Rossi got married in August 2008. 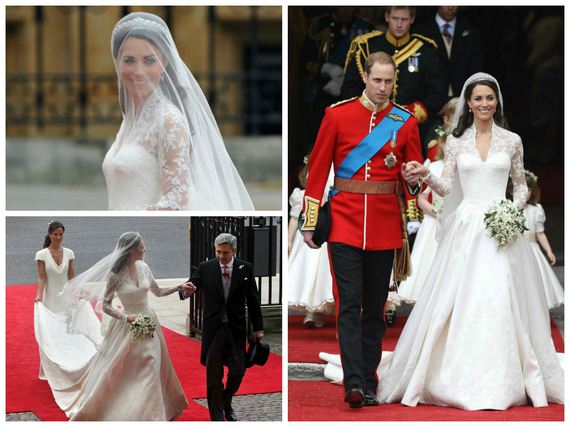 On 29 April 2011 millions of people around the world stuck to their screens to see the most awaited wedding of the century, the wedding of Kate Middleton and Prince William. The Duchess of Cambridge amazed all of us with her incredibly beautiful long gown by Alexander McQueen creative director Sarah Burton. She looked really divine! 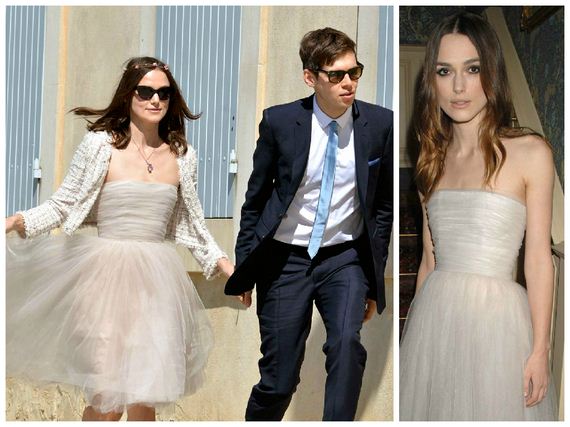 Keira Knightley chose a gorgeous gray chiffon Chanel mididress for her wedding day. On May 2013 she and James Righton secretly tied the knot. Keira look was simple yet sophisticated. The star complimented her gown with a floral garland in her hair and flats. 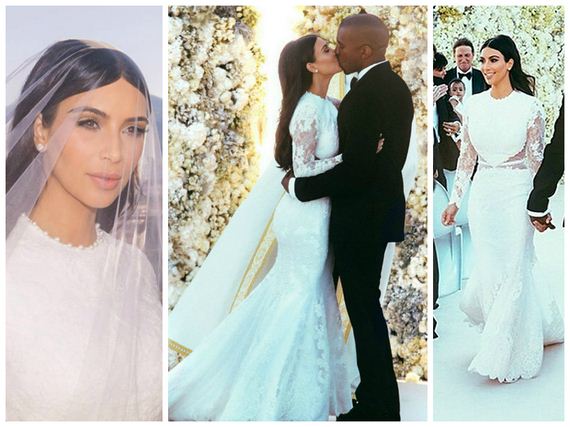 It was not the first time Kim walked down the aisle, but it definitely was the most fabulous wedding dress she had ever worn. She looked majestic and charmed everyone with her fabulous Givenchy lace gown. Kim Kardashian and Kanye West got married in May 2014.