Jennifer Aniston stopped by The Tonight Show Starring Jimmy Fallon on Wednesday to talk up her latest project, Cake. After her interview, the actress joined Jimmy for a game of “Lip Flip,” during which they did impressions of Billy Bob Thornton in Sling Blade and ended up in a heated debate about whether the New England Patriots or Seattle Seahawks will win the Super Bowl. Jennifer’s appearance sort of gave us Friends flashbacks!

Jen has been keeping busy this month doing TV press and print interviews for the emotional indie drama; her role has garnered best actress nominations at the Golden Globes, Critics’ Choice Movie Awards, and upcoming SAG Awards, though Jen’s Oscar snub has been making major headlines since the nominations were announced last week. She recently talked to Ellen DeGeneres about how much attention her omission from the list has gotten, joking, “Yeah. I’m the number one snubbed! That’s the silver lining.” Watch Jennifer’s hilarious game of “Lip Flip” with Jimmy Fallon above now, and be sure to check out more of the funniest viral videos. 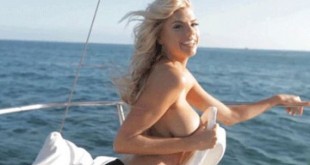