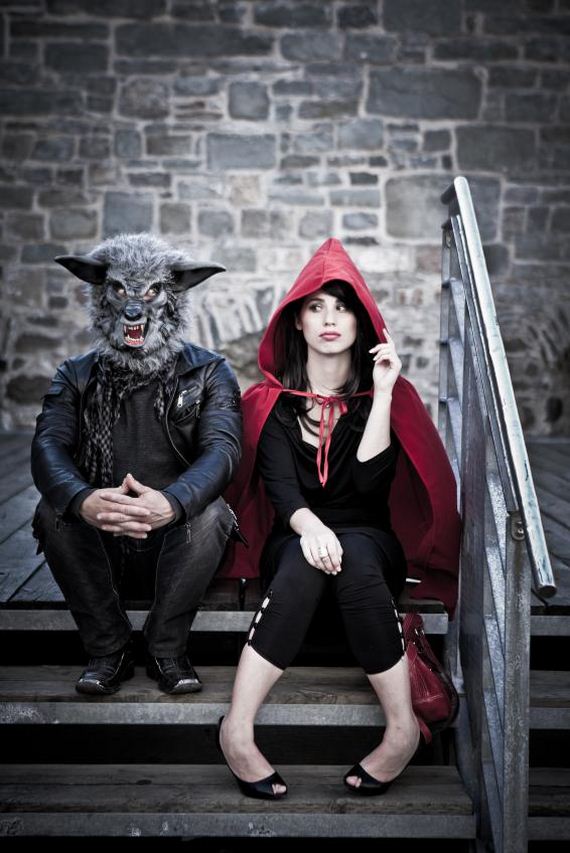 This classic story lends itself to a couple’s Halloween costume – simply dress up in a red hooded cape and have a buddy wear a wolf mask and a black outfit. Make your way over to Love To Know Costumes to check out more Halloween costume ideas for couples. 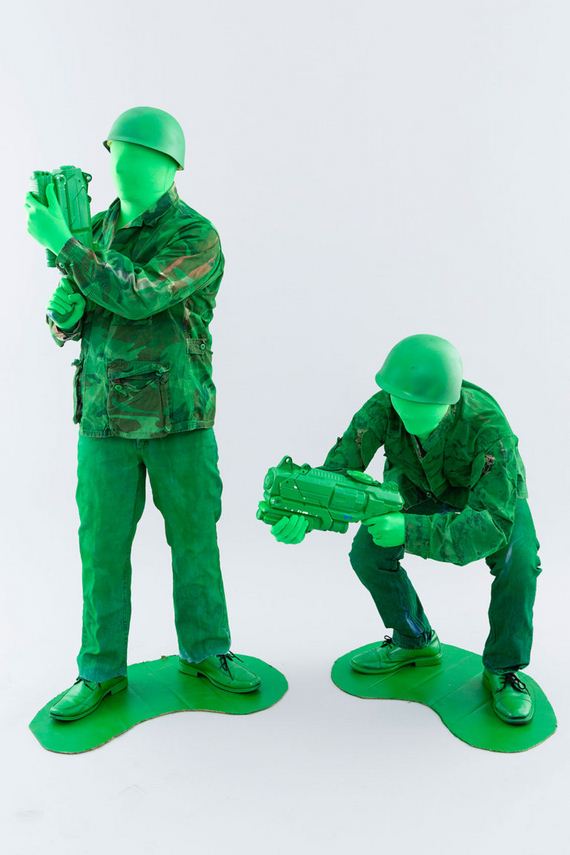 Go head to toe green for this clever toy army man costume duo. This requires a bit more effort to make than other costumes, but with a very eye-catching effect! Everyone will be impressed with your ingenuity. Head over to Brit + Co. to check out the tutorial. 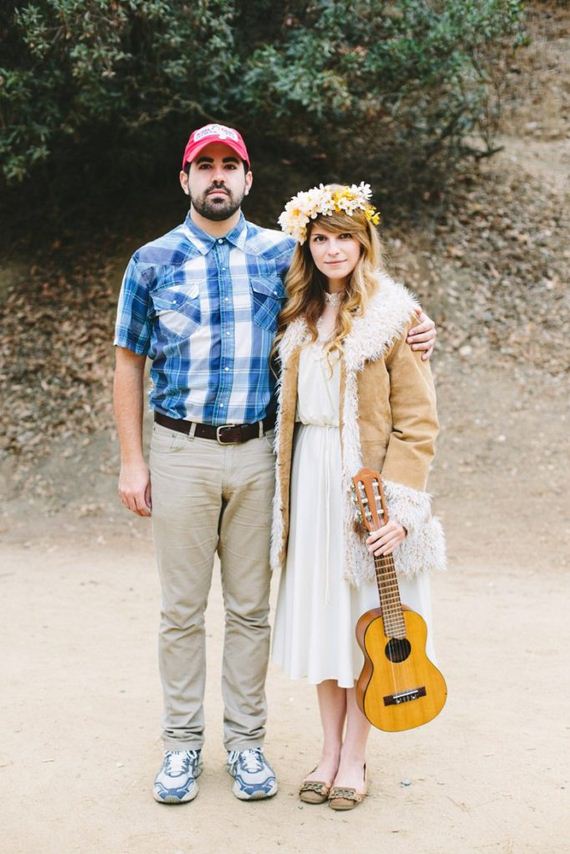 If you were a fan of the 1994 hit movie Forrest Gump, then you’ll probably love this genius couple’s costume. Forrest Gump is wearing his red hat and sneakers along with a slightly too small pair of pants and plaid shirt, while Jenny has a hippy look. Read more here.

4. Elliott and Gertie From E.T. 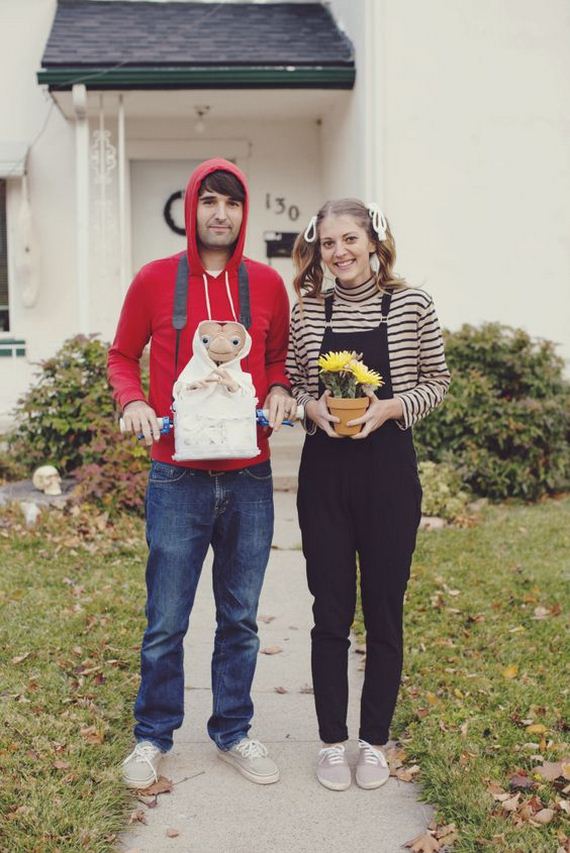 Here’s another great movie reference, this time from the 80’s. This duo is dressed up as Elliott and Gertie from the classic movie E.T. The key component is obviously the stuffed E.T. toy, but the red hoodie and the pig tails on Gertie are important too. Check it out here. 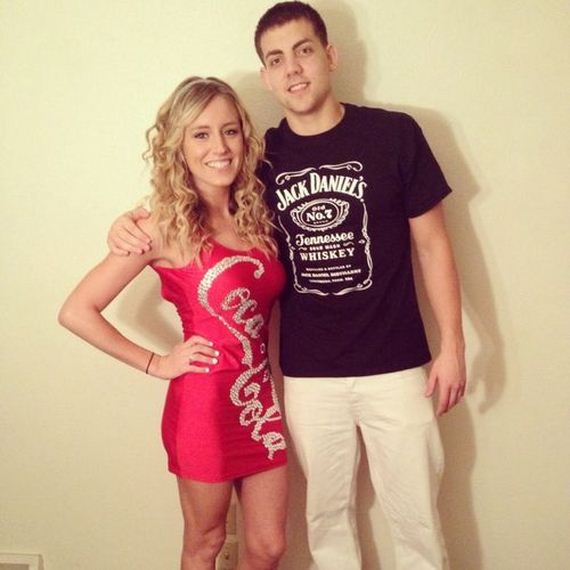 This clever couple got creative and went as a drink – a Jack and Coke! The guy wore a Jack Daniel’s whiskey t-shirt, while the girl wore a cute red Coca-Cola dress. Make your way over to Explorite to check out this and tons of other couple’s costume ideas. 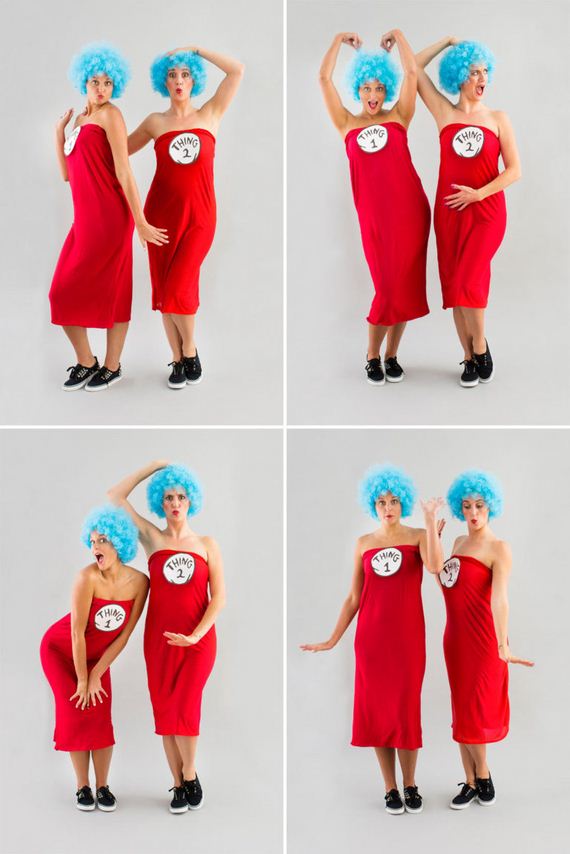 Thing 1 and Thing 2 from Dr. Suess’s book Cat in the Hat are a simple and eye-catching costume for two people. The red outfits and blue wigs are the only two major identifiers you’ll need to buy, and simply make little signs yourself. Read the tutorial here. 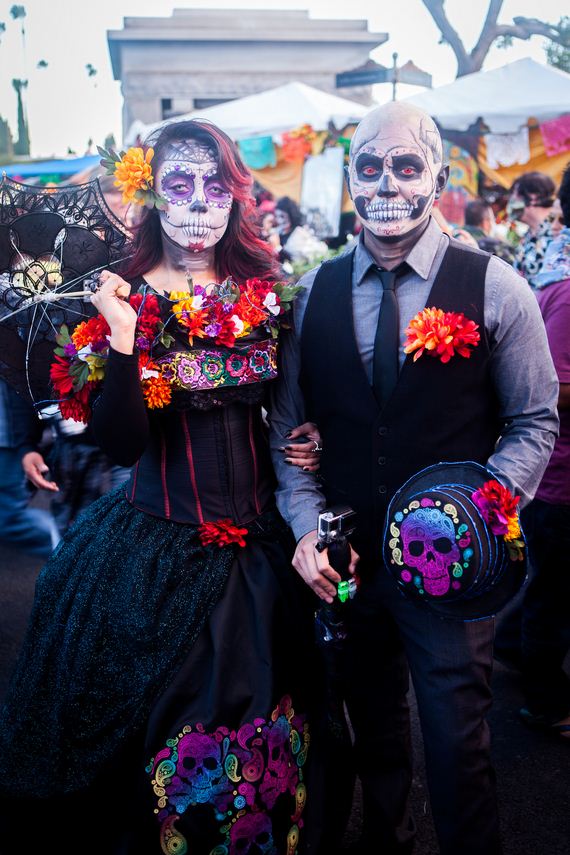 If you’re a fan of the Mexican holiday Dia De Los Muertos, give their traditional costumes a go for Halloween. The makeup is the most important element, and don’t forget to add some brightly colored flowers to your outfit and even your hair. Found on Mooshuu’s Flickr page. 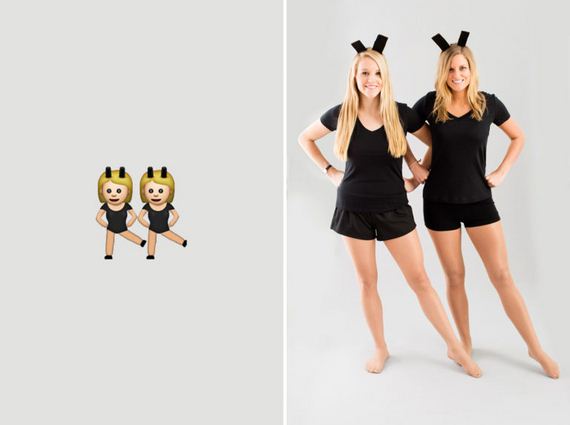 If you and a friend are heading out on the town together for Halloween, give this clever costume a try. All you’ll need is a black shirt and shorts, along with a headband with black paper horns attached. Head over to Brit + Co. to see this and other clever emoji costume ideas. 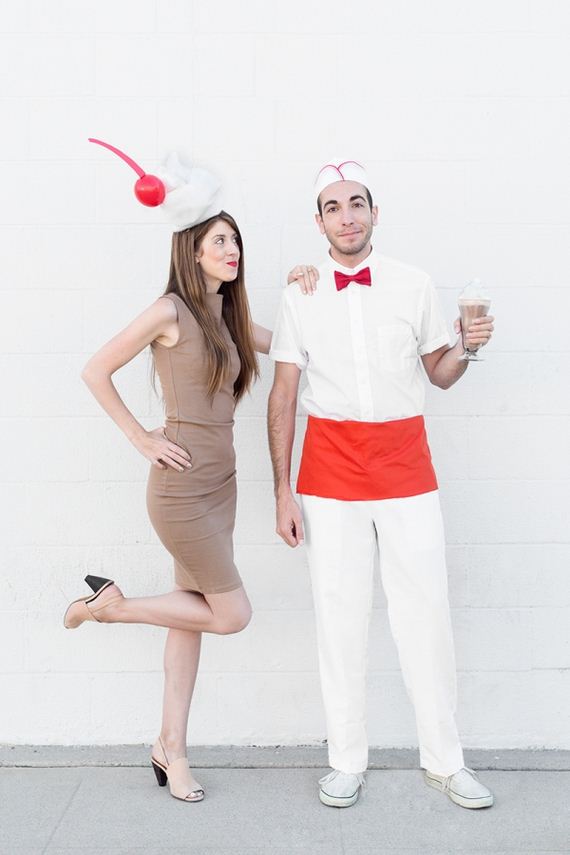 This one is just adorable. The girl on the left is dressed up as a milkshake, while the guy on the right is an old school diner waiter. These aren’t hard to recreate, either… just raid your own closet and whip up a cherry and whipped cream hat! Read the tutorial here. 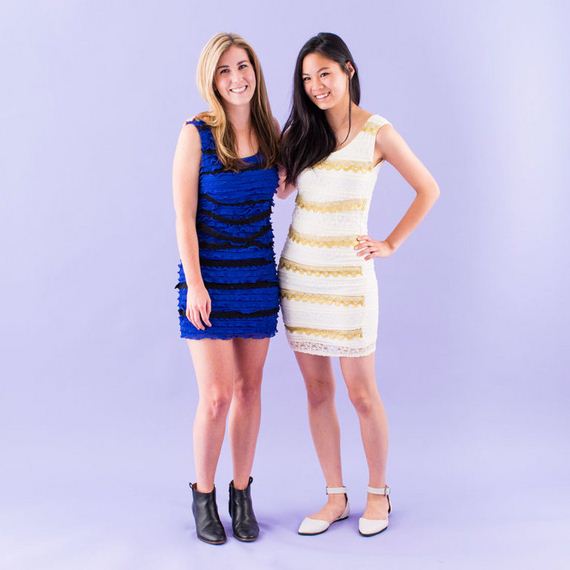 Here’s another great pop culture-inspired costume made for two people. Do you remember the confusing photo that came out in which some people claimed to see a blue dress with black lace, while others saw a white dress with gold lace? Well here it is, in costume form. Read more here. 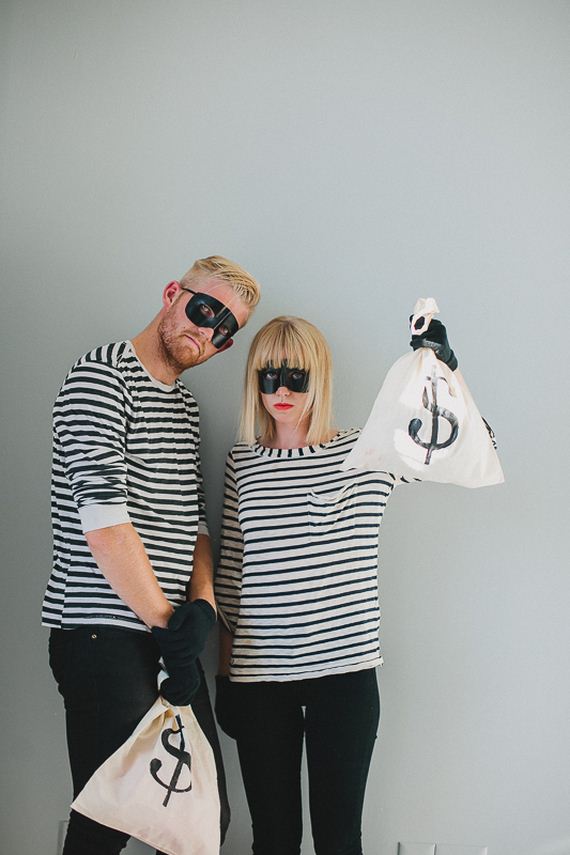 These matching costumes have a bold effect without a ton of effort. Simply grab a striped shirt and black pants that you probably already have, and pair them with a black mask, gloves and a money bag. Head over to Say Yes to check out the full tutorial. 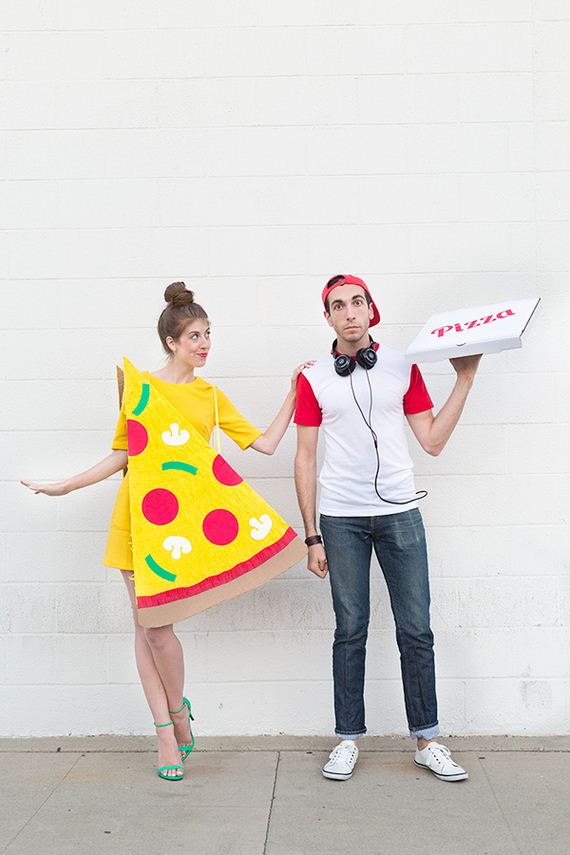 This couple is just the cutest, with their pizza slice and delivery man costumes. The man’s costume is easy to assemble… just grab some basic clothing from your closet and a pizza box. And the pizza slice is a great DIY project – check out the tutorial at Studio DIY.

13. Jake From State Farm and Flo From Progressive 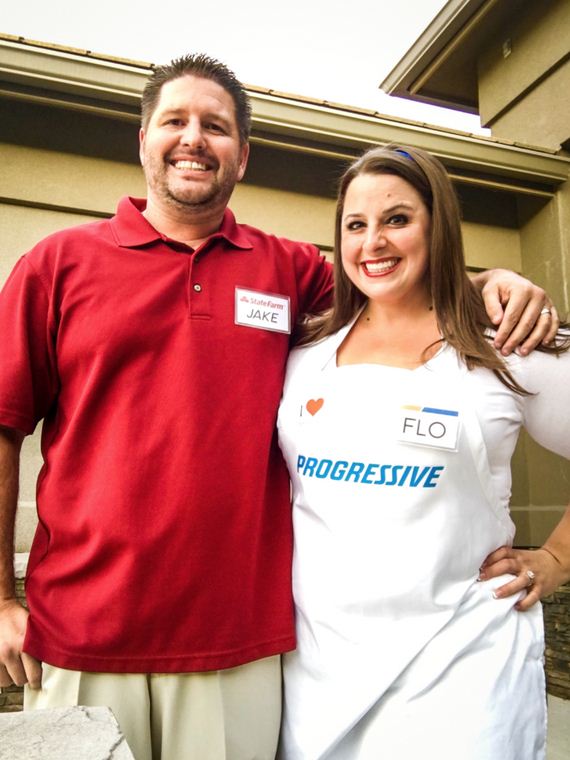 These costumes are incredibly easy to create, because the name tags are the key to getting recognized. All you need for a Jake costume is a pair of khakis and a red shirt, and Flo needs a Progressive apron. Head over to It’s Naptime Somewhere to see the tutorial. 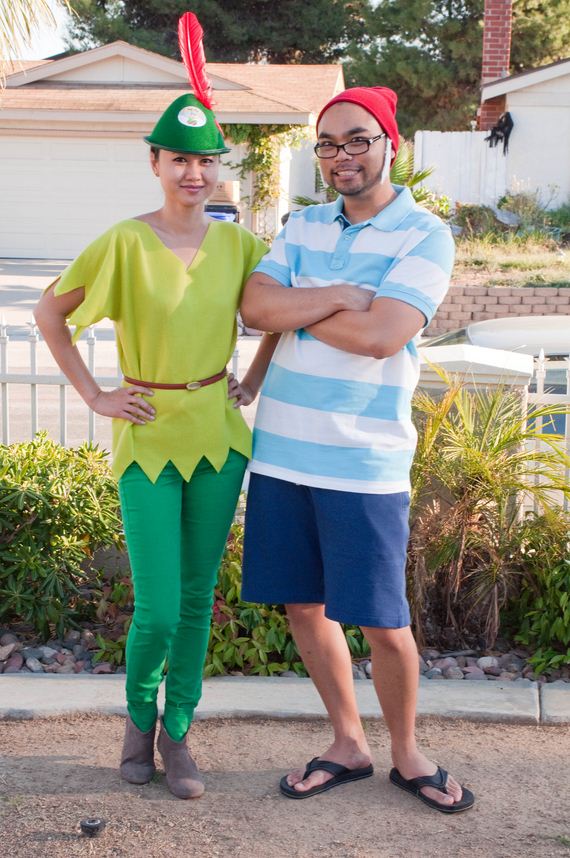 This adorable duo is dressed as Peter Pan and Mr. Smee from the Disney classic Peter Pan. Because Mr. Smee is a difficult costume to find in stores, they decided to make their own. Make your way over to Mister & Miss B’s blog to find out how they did it.

15. Alice and the White Rabbit 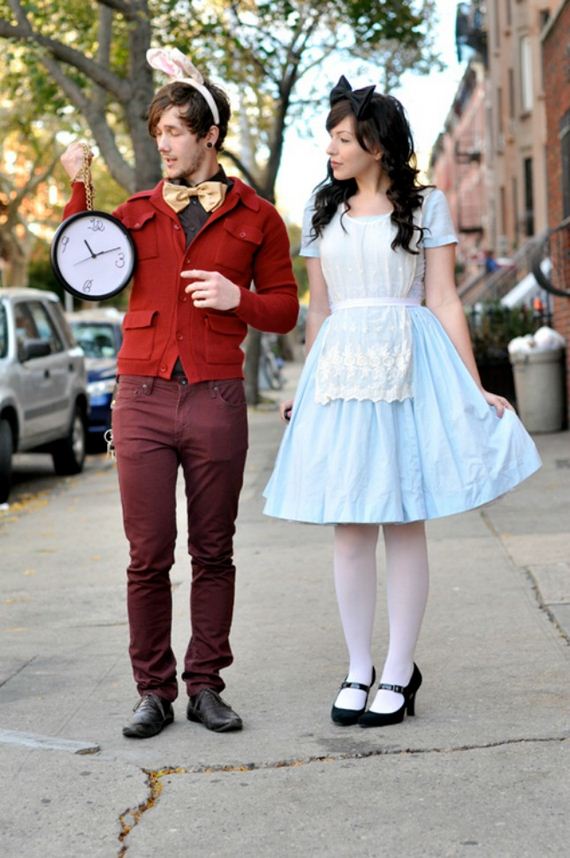 Here’s another great example of a Disney movie come to life. Here we have Alice and the white rabbit, and they made their costumes mostly from things they already had lying around. Head on over to Keiko Lynn to read all about this adorable set of costumes. 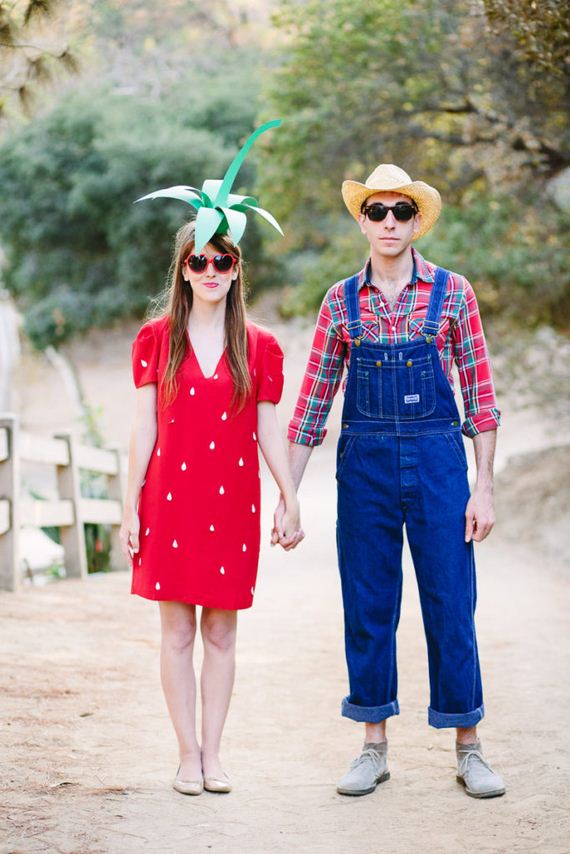 Here’s a sweet idea – dress up as a strawberry and a strawberry farmer! For her costume, a red dress is transformed using little pieces of white felt, and the hat is made out of paper. Make your way over to Studio DIY to find out more about this couple’s costumes. 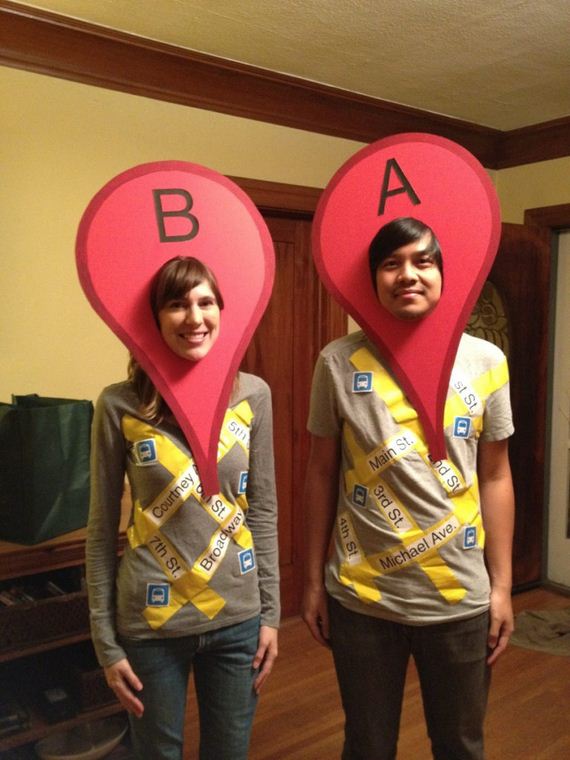 This incredibly clever costume idea is sure to get a few laughs from your friends. This couple is dressed up as Google driving directions, with one as point A and the other as point B. Simply make the red points out of poster board, and tape some street names to your shirt. Found here. 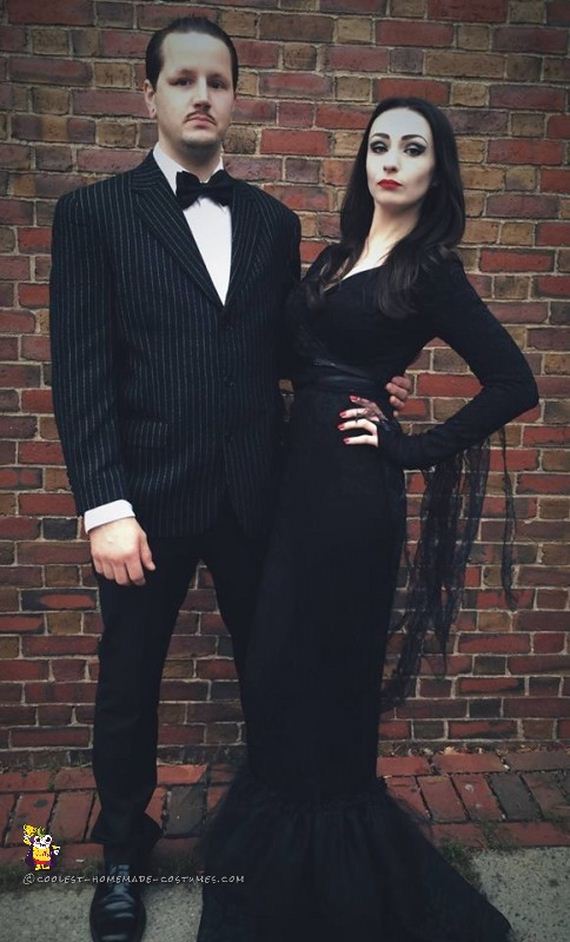 This couple dressed up as Morticia and Gomez Addams from the famous movie The Adams Family. Lots of black clothing is the key here, with a flowing dress for her. Light colored powder gives her face a pale look as well. Read all about the costume over here. 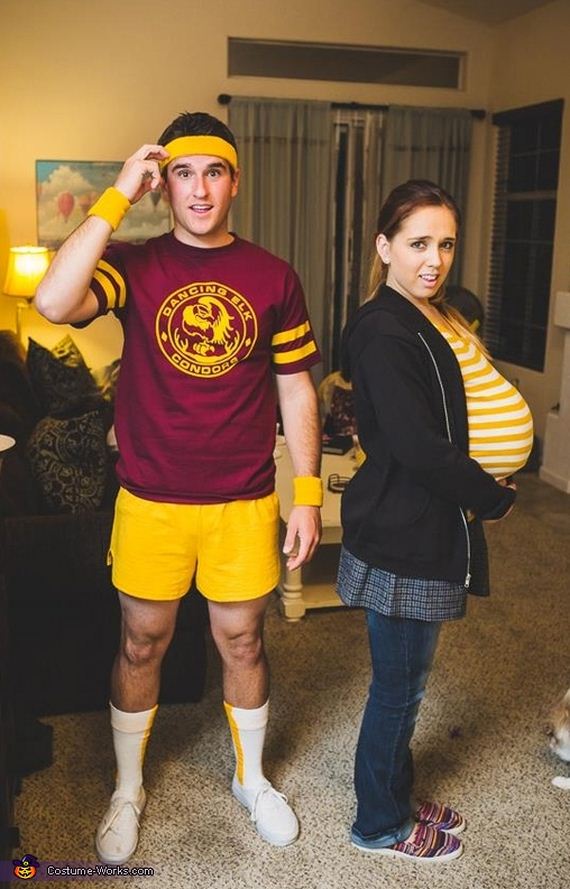 If you’re a fan of the cult classic movie Juno, then you’ll love this couple’s costume. Some retro workout-wear is required for his costume, while a big belly and a striped shirt are the keys to hers. Head over to Costume Works to read about how they assembled their looks. 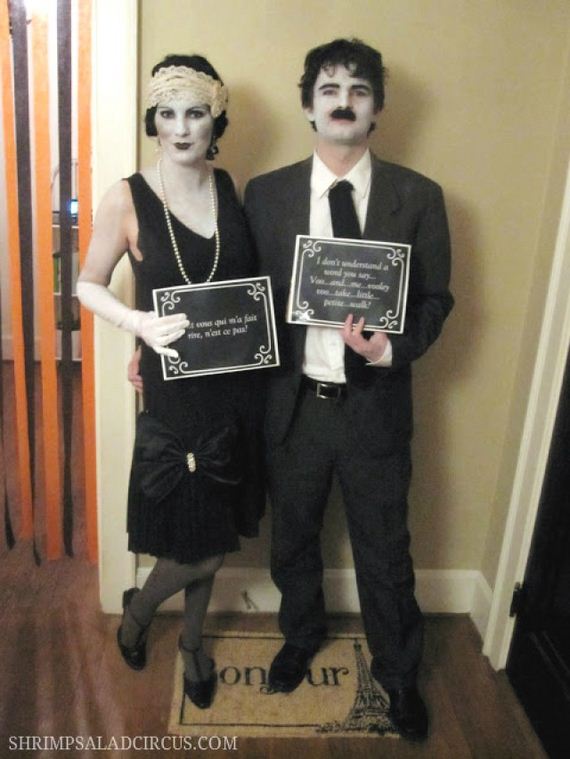 The coolest part about these costumes are that they are almost completely black and white. To achieve the look, choose all black and white clothing and then purchase some white makeup to paint your face. Finish the look with the signs! Get the tutorial here. 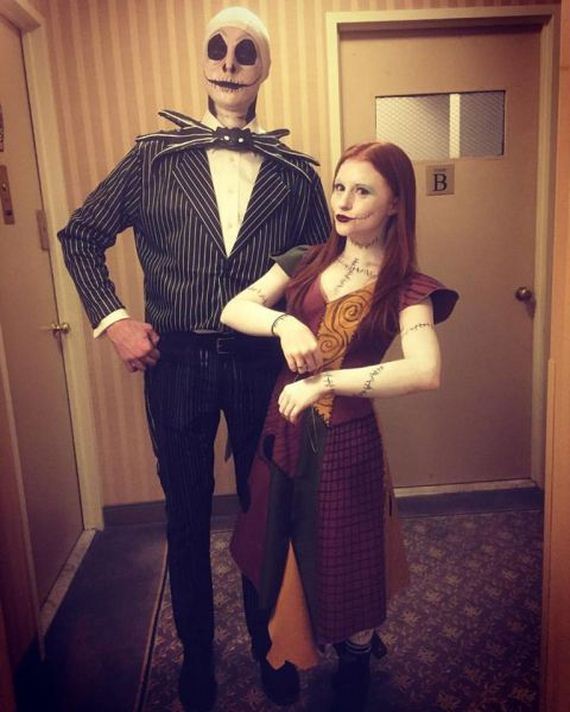 These spooky costumes take a bit more effort to pull off, but the results are sure to win you any costume contest you enter! Head over to YouTube to find out how to do the makeup. You can find a tutorial for his here, and hers here. Found at Good Housekeeping. 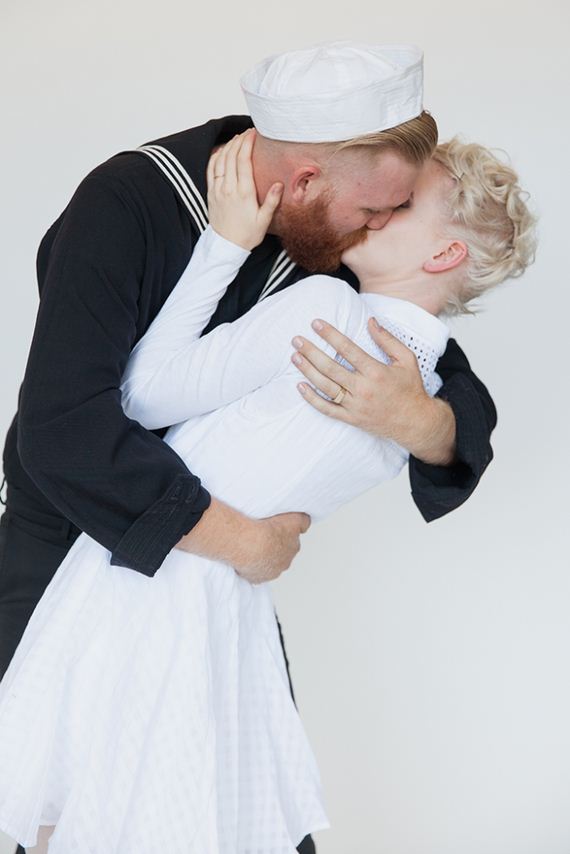 The iconic kissing sailor image is brought to life with this adorable costume from Liz at Say Yes. The sailor outfit is the key, of course, while the white dress for her can be anything you have lying around. Then kiss the whole night! Make your way over to Say Yes to read the tutorial. 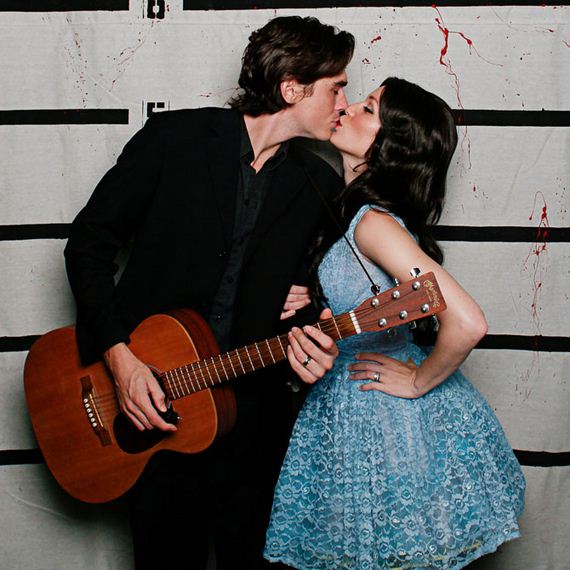 Here’s a great costume for the musical types out there. Johnny Cash often wore black, so just grab a bunch of black clothing from your closet and borrow a guitar if you don’t have one. For June, wear a cinched waist blue dress. Found over at Brit + Co. 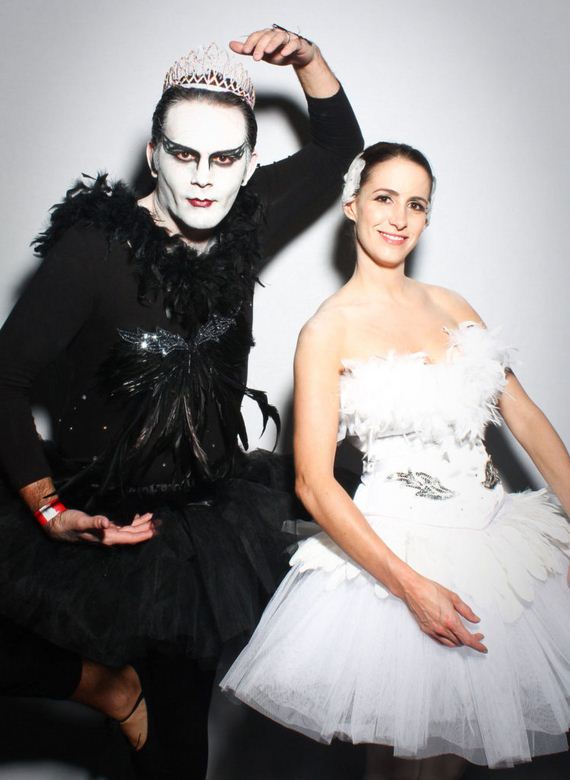 If you’re a fan of the movie Black Swan, then you’ll adore this amazing couple’s costume idea. They are dressed as black swan and white swan. The key to black swan is the unique makeup, and then white swan will be recognized immediately. Found here. 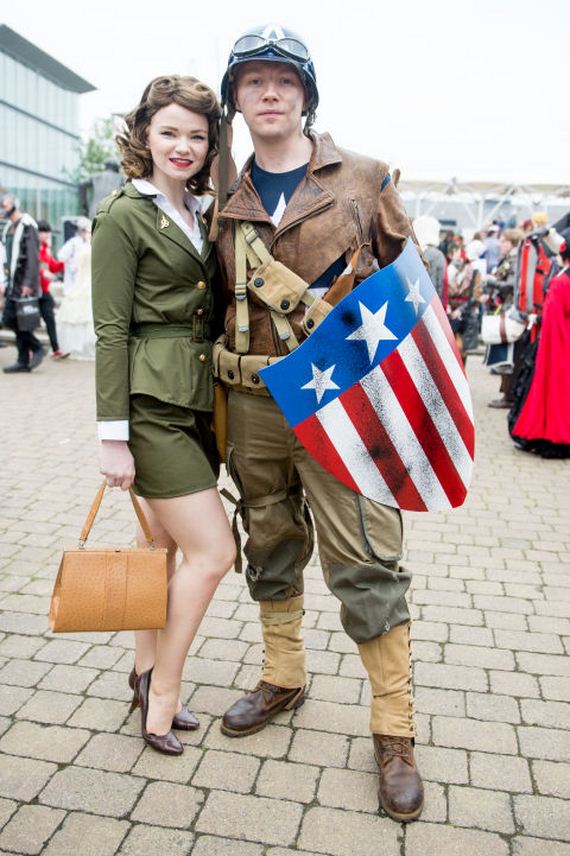 And for our last epic couple’s Halloween costume idea, we have an incredible Peggy Carter and Captain America costume. You’ll probably have to do some serious digging at your local thrift shop for this one, but wow, what an incredible result! Found over here.