Office parties are sometimes fun, but mostly awkward. This is one of the few times each year where your coworkers are hopped up on sugar, feeling jolly, and quite possibly intoxicated all at once. People will over-share. They might make out with other staffers. They will definitely eat too much. And there are bound to be some uncomfortable gift exchanges for Secret Santa. But no matter how bad you think your office parties are, they are nothing compared to the chaos and the drama that went down in December at the Dunder Mifflin office in Scranton, PA. Here is a gif-tastic look back at why Dunder Mifflin always had such horrible, no good, very bad holiday parties.

1. The Fear of Getting Pranked Was Very Real

Whether Jim was creating gift-wrapped versions of Dwight’s desk and chair or Dwight was terrorizing Jim with menacing snowmen, these hilarious pranks always went one step (or five) too far and everyone else just tried to stay out of their way.

2. When Michael Suffered, Everyone Suffered

The man tried to cancel a holiday after being dumped by his girlfriend. Another time, he spent too much on a Secret Santa gift and forced everyone else to get something they didn’t want because he ended up with a homemade oven mitt. Then there was that time he was pissed about Phyllis dressing as Santa so he dressed up as God and ruined the punch with his fake beard. Yes, he was a lovable giant baby, but a giant baby nonetheless.

3. Secret Santa Gifts Were…… Not Great

Especially if Creed pulled your name out of the hat. Unless an old ill-fitting shirt is on your Christmas list, of course. 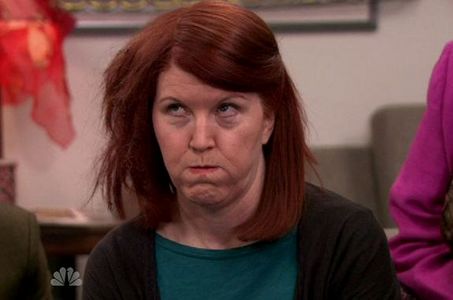 5. And That Would Often Lead to Other Drama

Ah, the forced intervention. What a great way to ring in the holidays. Or when Todd Packer would show up and spit out a series of terribly sexist jokes. Or when Michael brought two waitresses back to the party and couldn’t tell them apart

6. Angela Was Usually in Charge

Which was always a bummer because she was the absolute worst at having fun.

7. Sometimes There Were Party Wars

As if there wasn’t enough drama at one Dunder Mifflin soiree.
8. And Karaoke 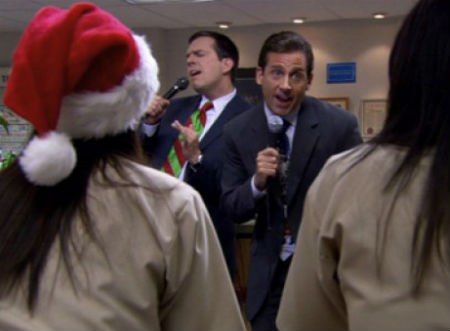 Some people love it, but I can’t listen to a second of it without cringing in embarrassment for them.

9. There Were Some Happy Endings

Lots of Jim and Pam “Aww”s.

10. But Mostly, These Christmas Parties Were Just Weird

I guess that’s what office holiday parties are all about though, right? Gettin’ weird with your coworkers?

Relive the madness of these messy holiday parties at Dunder Mifflin by streaming episodes on Netflix. 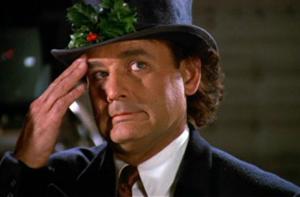 Previous Jimmy Fallon and One Direction’s Christmas Sing-Along Will Bring You So Much Holiday Cheer
Next Happy Holidays! Here Are Magical GIFs of John Krasinski Dancing in a Santa Suit