25 Models Who Don’t Suck at Acting

Here are 25 extremely pretty men and women who’ve carved out a niche for themselves as credible, if not outstanding, performers on TV and in films.

In one of her earliest film roles she played the famously self-destructive model Gia Carangi—a glimpse of what might have been? If only the powers that be had spotted her modeling prom-dress chic in this JC Penney advertisement. Consolation career as Oscar-winning actress ensued. 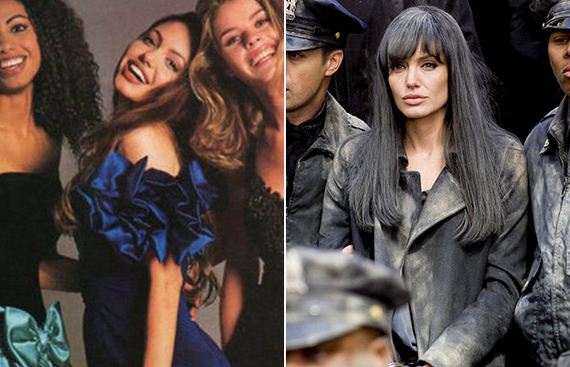 Daughter of legendary Hollywood director John Huston, Anjelica had a unique look that made her one of the iconic models of the ’70s. She was a particular muse of one of the decade’s biggest designers, Halston. At 61 years old, the Oscar winner has had an impressively stacked filmography under her belt, becoming a frequent collaborator with director Wes Anderson and starring in NBC’s musical drama Smash. 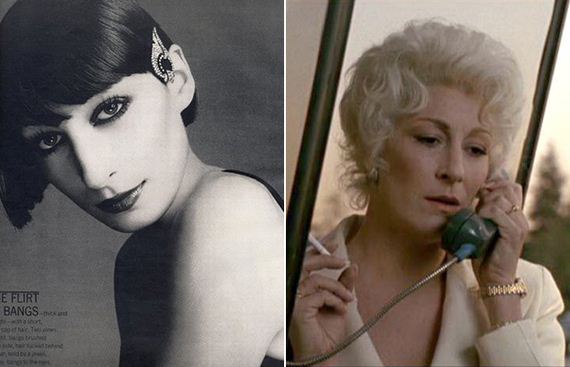 Kutcher was obviously very pretty when he hit the small screen in That 70s Show —kudos to ultra-cougar Demi Moore for getting a piece of that—but he wasn’t exactly Laurence Olivier. He’s worked on his game since then, and his performance in the Steve Jobs biopic jOBS might just make people take him seriously. 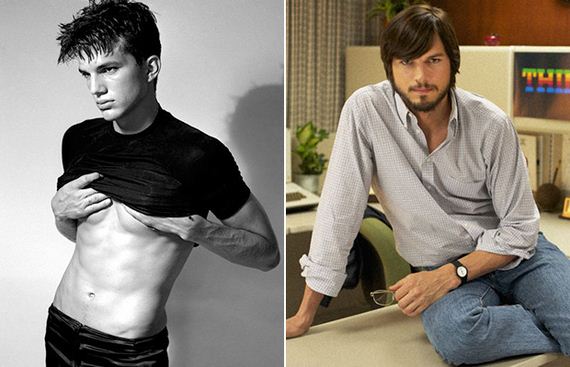 What can you say about Brad Pitt? Generally considered one of the most handsome men in the world, he couldn’t help but do a little modeling in the early days. Once he made his mark as a hayseed boy toy in Thelma and Louise, there was no looking back. 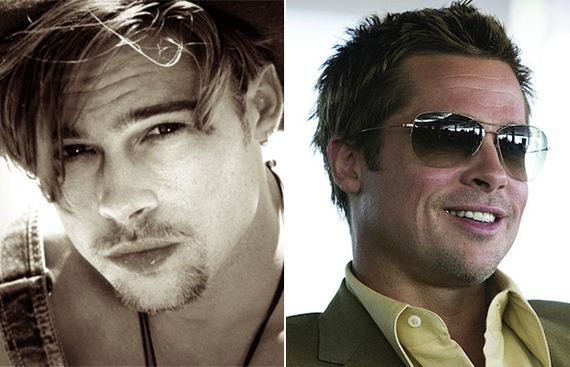 We’re sure Diaz could have had a prosperous career as a model, but acting beckoned. As demonstrated in There’s Something About Mary, she was too comically gifted to remain a mute mannequin. And by “comically gifted” we mean goofy. 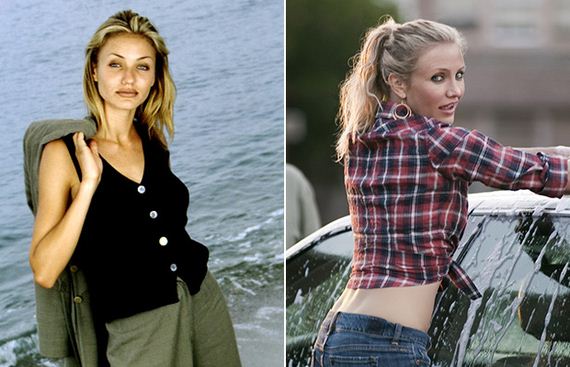 When you look like this, your career options range from international fashion icon to male stripper. Tatum did a little bit of this and a little bit of that before the acting took off, and he brought it all back together with 2012’s Magic Mike. 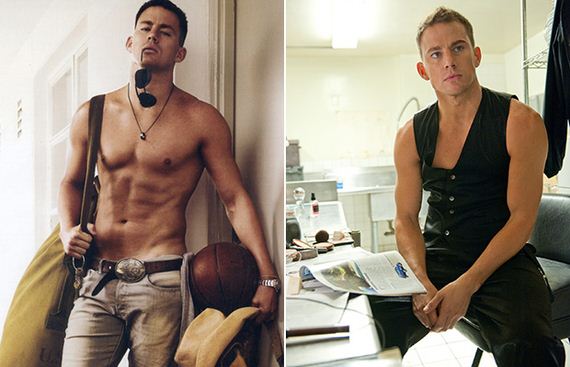 Modeling was Theron’s point of entry into the entertainment world, although she figured on being a ballerina until she busted her knees. The acting thing proved to be a good fit, and after notable appearances in The Devil’s Advocate and Mighty Joe Young, Charlize-mania kicked into gear with The Cider House Rules in 1999. It didn’t hurt that she was on the cover of Vanity Fair touted as the “White Hot Venus.” She was anything but a love goddess in 2003, when she played the downright ugly Aileen Wuornos in Monster, for which she won an Oscar. 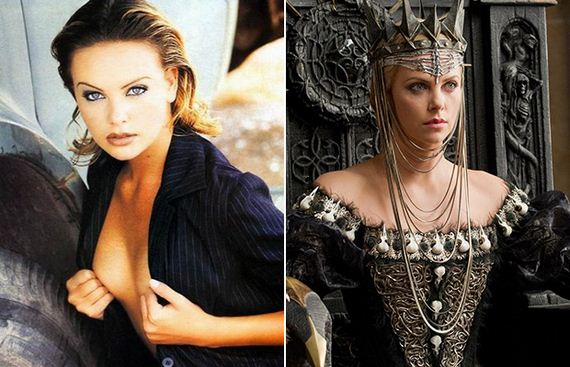 Starting as a model for Tommy Hilfiger and Marc Jacobs, Matthew Gray Gubler is solid proof that ridiculously good-looking people can have brains. Not only does he play a genius in Criminal Minds on CBS, he’s directed four episodes, putting his NYU film degree to good use. 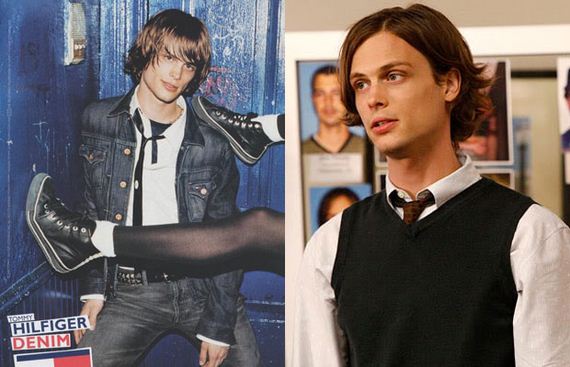 Once upon a time, men’s underwear advertisements were poopulated by Ward Cleaver types who looked supremely comfortable in their BVDs. Calvin Klein gave us passion, drama, and rock-hard abs, washerboard-style, glistening in the sun. You have to wonder whether Hounsou would have become an on-screen symbol of the unbreakable human spirit in films like Amistad and Blood Diamond if he had not looked so damn good in his tighty-whities. 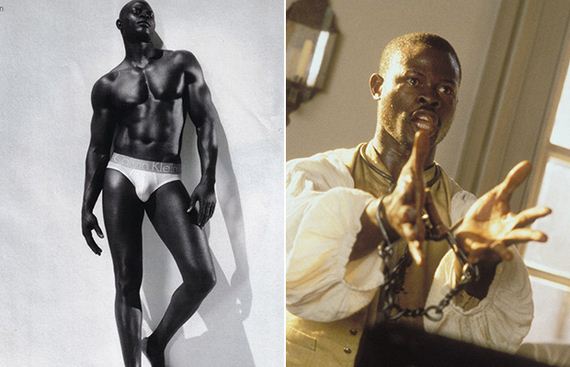 Possibly the latest unconventional British heartthrob thanks to his performance in Les Miserables, the multi-talented Redmayne has been an acclaimed stage actor in the UK for over a decade. As he was making inroads in film—notably in The Other Boleyn Girl (2008)—he modeled for Burberry. 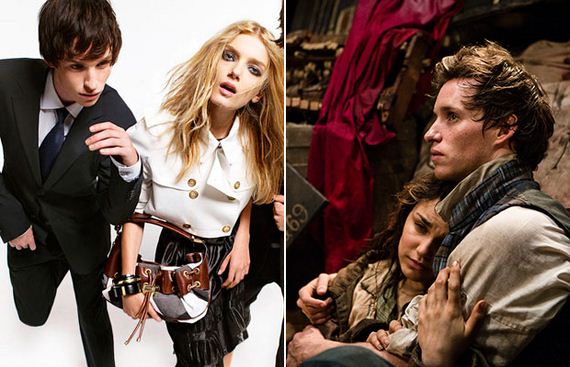 Berry was always a model-actress double threat, and did fashion gigs while transitioning from pageant ace (Miss USA runner-up, 1986) to A-list actress. As her fame has skyrocketed, she has become a prominent celebrity model, notably as one of the faces of Revlon. When she won her Oscar for Monster’s Ball (2001), she made a stir by publicly commenting to Revlon honcho Ron Perelman that he’d have to pay her more because of it. Twelve years later, she’s still a global ambassador for the brand. 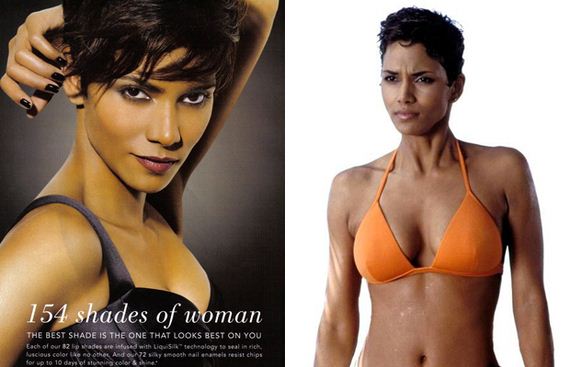 King hit the ground running in her mid-teens. Her modeling name, James King, was an intriguing gender fakeout, and a New York Times Magazine cover story “James is a Girl” seemed to confirm her next-big-thing status. It was 1996; she was 16. Two years later, she was on House of Style with Rebecca Romijn-Stamos, and before she was 20, she was looking for a new challenge. She paid some dues in a crappy blockbuster (Pearl Harbor, 2001) and a Wayans comedy (White Chicks, 2004) before getting a shot at something suitably cool, Sin City (2005). She currently plays Rachel Bilson’s southern-belle nemesis on Hart of Dixie. 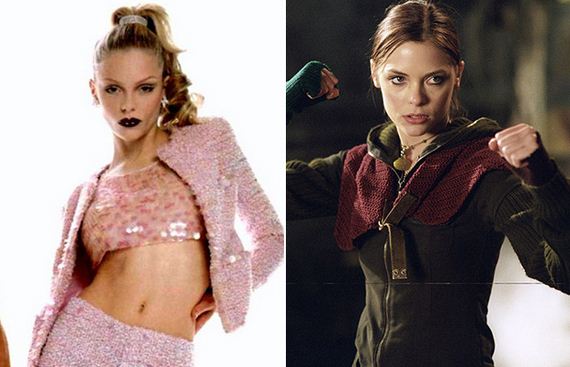 Before portraying a mutant who shoots frickin’ laserbeams out of his eyeholes as Cyclops in the X-Men movies and playing Liz Lemon’s one true love, Christopher Cross, on 30 Rock, the loveable funnyman gave sexyface for Versace. 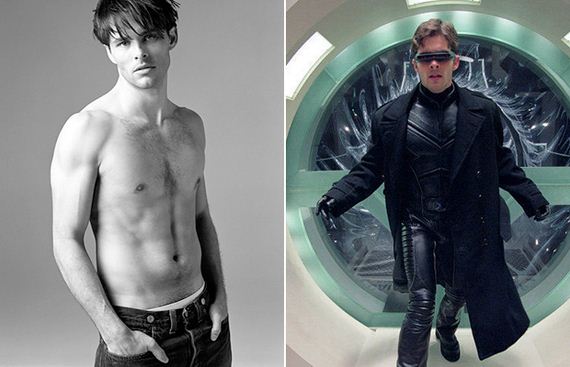 Holloway has a whole long list of acting credits from the early 2000s, but it’s probably nothing you’ve ever seen. The cataclysmic event in Holloway’s career was getting cast on Lost, which started in 2004; it wasn’t long before he was being acclaimed as “TV’s Hottest Hunk” and suchlike.Prior to his acting career, Holloway—who is 43, you know—quit college to be a model. Clever googling will turn up pictures of him in horrendous ’90s fashion and hairdos, as well as a Details cover from 1991 that defies explanation. 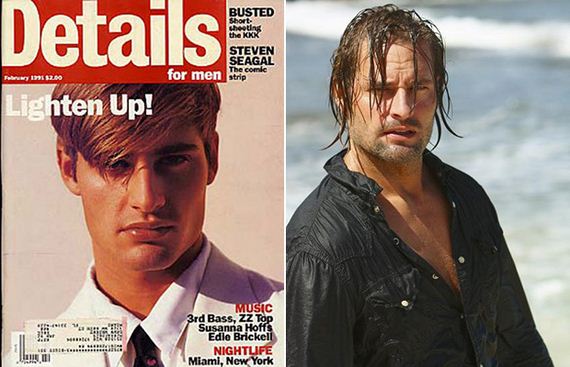 “Marky Mark” Wahlberg didn’t start out as a model, but he didn’t start out as a rapper either. He started out, more or less, as a thug, and served 45 days on an assault conviction that had resulted from a charge of attempted murder. Running around in his skivvies in the “Good Vibrations” video was not really anything to be proud of, but it kept him off the streets. His freakish physique landed him in Calvin Klein advertisements with Kate Moss, which is a step up from the company he kept at the Deer Island House of Correction. Sanity set in during the late ’90s, and he became a major film star thanks to Boogie Nights (1997), Three Kings (1999), and The Perfect Storm (2000). 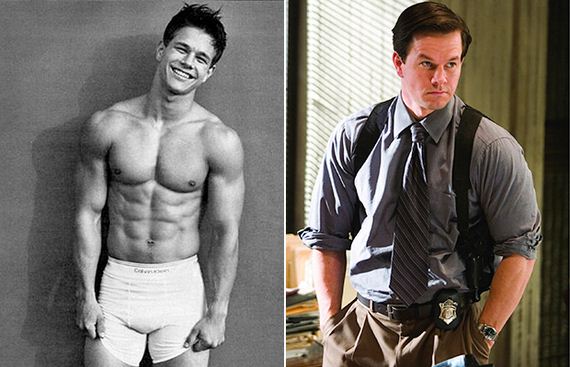 Jovovich may be the perfect example of a successful model-turned-successful actress. As a model in the late ’80s, she had photographers Herb Ritts and Richard Avedon under her spell, and made bank repping L’Oréal, Banana Republic, Christian Dior, Donna Karan, and Versace. She was still in her teens, by the way.Although it wasn’t her first film, The Fifth Element (1997) seemed like a debut, establishing her as an exotic, probably dangerous heroine. In 2002, she starred as Alice in Resident Evil, the first flick in a frighteningly lucrative film franchise that has spawned five sequels all starring Jovovich, and all highly successful at the box office (though not with critics). 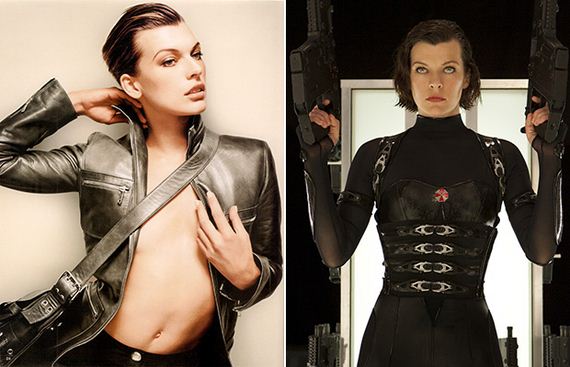 Bellucci’s legacy is basically that of a super-hot Italian fashion model—her heyday being the ’80s and ’90s—who has transitioned into acting very nicely. As an actress, her best years were (arguably) 2003-04, when at the age of 39-ish she played Mary Magdalyne in The Passion of the Christ and Persephone in two Matrix sequels. 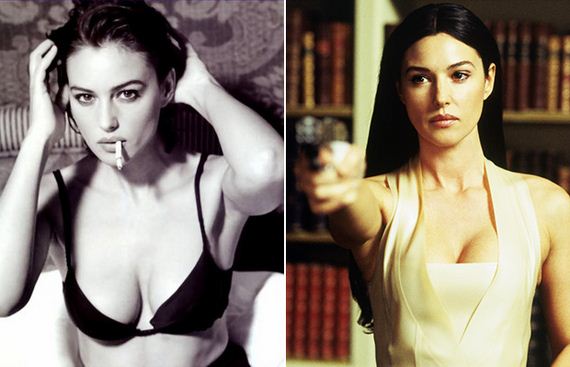 Weisz, despite her non-British last name and parentage (Hungarian dad and Austrian mom fled the mainland before the outbreak of World War II), the British-born actress gained a reputation as an “English rose,” an archetypal English beauty. This is good for getting modeling gigs in the UK. Although her acting career has been a roaring success since The Mummy (1999) and The Mummy Returns (2001), she still has her modeling chops, and remains a muse to designer Narciso Rodriguez. 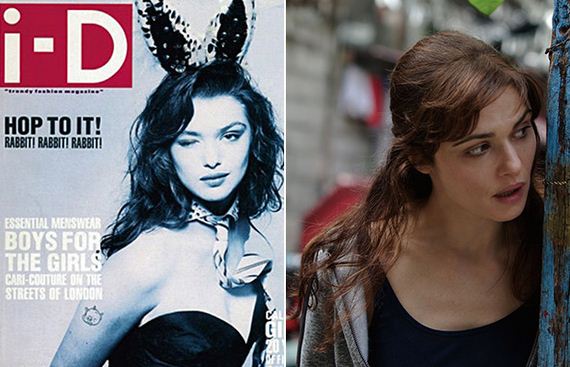 Stone was clearly meant for the big time, and in 1977, just days after fleeing her hometown of Meadville, Pennsylvania, for New York City she was signed by the Ford Modeling Agency. The acting career took a bit longer to heat up, and she spent the 1980s in minor roles in real movies or major roles in B-movies. In 1990, her appearance in Total Recall set her up for stardom, and when the moment came to show the world her stuff in Basic Instinct (1992) she didn’t flinch. 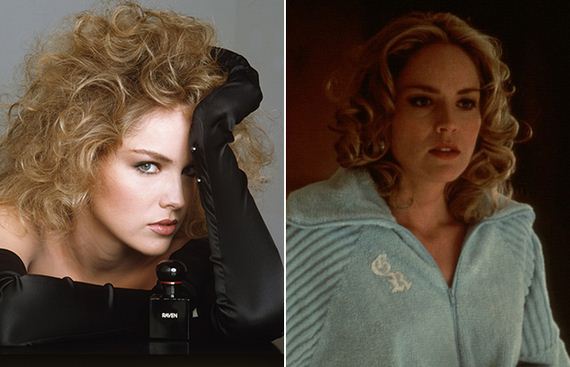 It’s kind of ridiculous to consider now, but Colombian cutie Sofia was reluctant to show off her God-given gifts at first. Brought up conservative and Catholic, she only took the plunge into sex-symbol-dom after the nuns told her it was OK. She was a catalog, runway, and bikini model throughout her glory years (which, mind you, have yet to end) while making headway in the fields of TV hosting and acting. Now 40, she is arguably the sexiest woman in prime time, and has been nominated for an Emmy for her work on Modern Family for three years running. 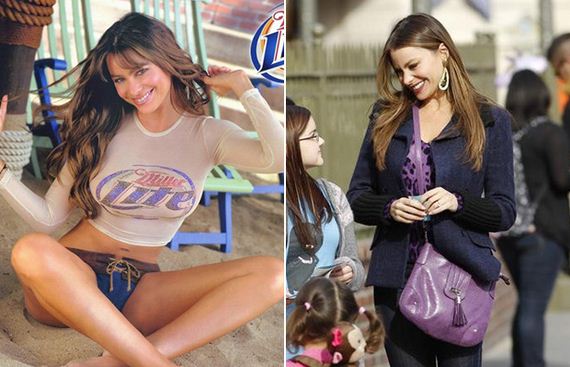 Before his career-making TV role as Clark Kent on Smallville, Welling modeled for Hilfiger, Abercrombie & Fitch, and Calvin Klein. Smallville lasted, believe it or not, ten seasons, and since its 2011 conclusion Welling has been MIA. But this year he’ll return to the screen in a big way with Parkland, and we shall see whether this extremely handsome fellow is as “super” as he once was. 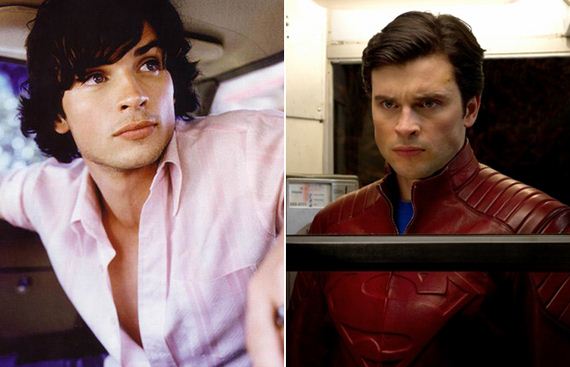 Helfer had a successful modeling career after winning the Ford Agency’s “Supermodel of the World” competition in 1992. A decade later, after having posed for Ralph Lauren, Versace, Chanel, and Giorgio Armani, she retired from modeling, and went on to host Canada’s Next Top Model. From 2004 to 2009, she payed TV’s sexiest cybernetic being as Number Six, a Cylon on the new Battlestar Galactica. She’s also had significant recurring roles on Burn Notice, Dark Blue, The Firm, and TRON: Uprising. 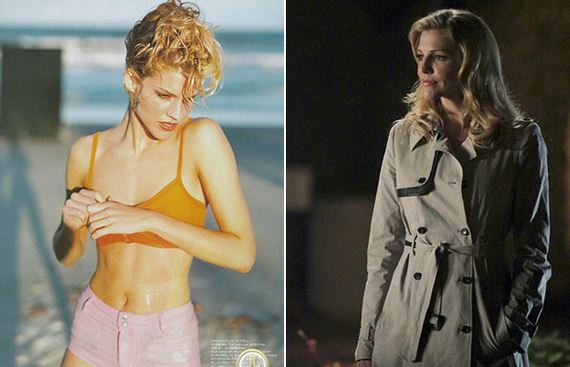 It was a specific kind of modeling—nude and published in Penthouse—that rocked Vanessa Williams’ world and brought her reign as Miss America to a premature end. But that’s not the only posing she’s done in her life. After picking herself up and dusting herself off, she made a career out of singing, acting, and yes, modeling for the likes of L’Oreal. As an actress, she’s done a number of movies (Soul Food, Shaft) but has found the most success on TV, playing memorable characters on Desperate Housewives and Ugly Betty. 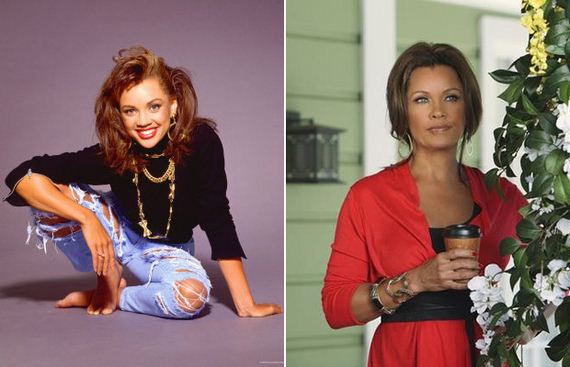 Discovered when she was 13 during a vacation in Moscow, Olga Kurylenko went on to model for Bebe, Roberto Cavalli and Victoria’s Secret. After transitioning into Hollywood, she’s become the go-to actress for femme fatale roles. She doesn’t just embody Bond girl Camille alongside Daniel Craig in the James Bond film Quantum of Solace (2008); she can also be seen in the upcoming Oblivion with Tom Cruise. 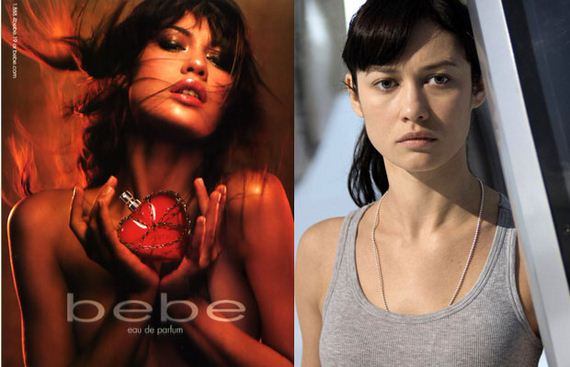 Despite his pretty face, the former teen model, who worked with Guess, Nautica and Versace, to name a few, has convinced audiences that he too experiences forbidden love sometimes—first as a bisexual who falls in love with a straight guy in The Rules of Attraction (2002), and today as vampire Damon who pursues a human (Nina Dobrev) on The Vampire Diaries. 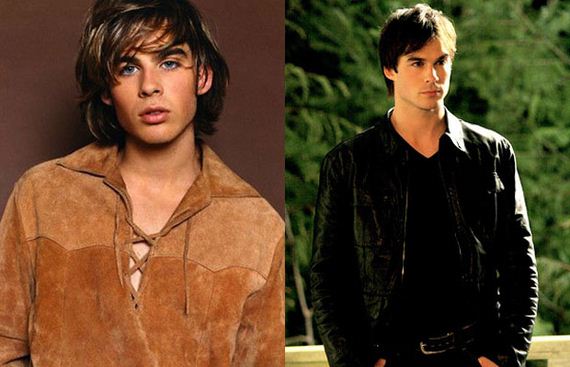